Prof Adrian Tordiffe, senior lecturer in veterinary pharmacology at the Faculty is no stranger to being in the limelight, either on his own or as part of interesting projects with other colleagues at the Faculty such as the intricate dental surgery he and Prof Gerhard Steenkamp performed on an elephant in Georgia in 2018, to remove its infected tusk. Or his intriguing work with cheetahs in captivity to ensure better health and proper care for them.

A researcher of note, Prof Tordiffe’s work is indeed paying off. This was confirmed in a quite rewarding way when on 17 July he was honoured with the South African Veterinary Association’s Research Award during its awards gala dinner at Emperors Palace.

This award is given to any veterinarian or group of veterinarians, for the best scientific article or series of articles, recently published in any scientific journal. Recipients of this award may be eligible for nomination for new original research.

Prof Tordiffe, who is based in the Department of Paraclinical Sciences qualified as veterinarian at the Faculty in 1997 and initially spent about 8 years in various small animal practices in the United Kingdom. Back in South Africa he initially ran the Faculty’s Outpatients Clinic on a part time basis, but soon also took on a research position at the National Zoological Gardens of SA in Pretoria. At the same time he enrolled for an MSc degree in Mammology at the University of Pretoria. The degree was awarded cum laude in 2006 and it is reasonable to assume that his career as a veterinary researcher kicked off with his Faculty appointment in 2005 and his subsequent employment at the Zoo in Pretoria. His current appointment as senior lecturer in pharmacology dates from 2015.

Judging from his list of publications, the current highly productive part of Prof Tordiffe’s impressive contribution to veterinary research started in 2012. Since that date he has been senior (4) or co-author of 23 refereed publications, thus an average of about four scientific articles per year. The citation for Prof Tordiffe’s award provides the best perspective on his achievements: “This is a very impressive figure by any standards, especially if one also considers the fact that in his positions at the Faculty (from 2005 – 2012), at the Zoo (from 2008 - 2015) and full-time at the Faculty (from 2015), he had both clinical and teaching obligations and could not devote himself entirely to conducting research, either personally or by his postgraduate students. The senior authors of several of the 19 publications referred to above were postgraduate students for whom he served as supervisor or co-supervisor. Judging from subject matter of the other publications, of which he is not listed as senior author, his contributions to the research recorded in these articles must have been significant and therefore thoroughly earned." 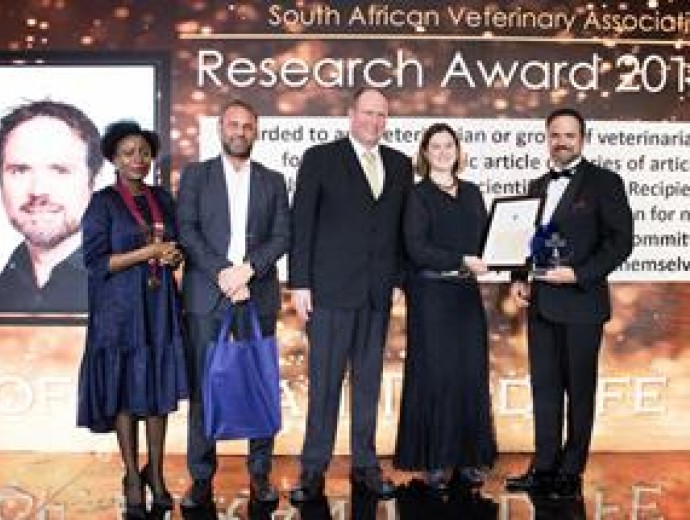