The 4th edition of the collaborative MSc in Tropical Animal Health, has officially started earlier this year. From 29 January to 7 February a number of staff members of the Institute of Tropical Medicine (ITM), Antwerp, Belgium joined the colleagues at the Department of Veterinary Tropical Diseases, University of Pretoria (UP) in South Africa for a successful start. Twenty four students who were carefully selected out of 100s of applications got together for the first time. In total 11 countries were represented from the Philippines to Ghana to the Netherlands. For some, this was the first time out of their home country. Curiosity, excitement but also a bit of hesitation reigned among the students. “What can we expect, what will happen during the next days?”

The first week was spend on campus. The students were introduced to the library, the tools that they will be using during the online part, and to a number of their modules: research methodology, laboratory diagnostics and basic epidemiology using R. Certainly the busy program did not leave space for much rest.

From Saturday 2nd to Wednesday 7th February, the group of students with a number of academic and administrative staff from ITM and UP travelled to the Hans Hoheisen Wildlife Research Station. During these 5 days the students were introduced to the One Health Basic concepts module experiencing the challenges for health at the interface of humans, domestic animals, livestock, wildlife and the complex natural environment surrounding the area. Field trips were made to human and animal clinics, and to a wildlife centre focusing on sustainable use of environmental resources. Students were divided into small groups to focus on a specific disease case, which provided a clear focus for them to interact with local experts. At the end of the week, each group gave a presentation outlining their case from three perspectives: human, veterinary and environmental. The students actively participated asking lots of relevant questions and showing great interest and commitment, during the field visits, the lectures and the group work on the disease cases. The contributions from experts covering the fields of public health, epidemiology, virology, microbiology, parasitology etc. who were involved in both presenting, coaching and participating in the discussions was outstanding and contributed to the success of the week. Over the coming months, the students will continue to work with these cases and explore how an integrated “One Health” approach can be used to deal with the challenges seen at the different interfaces.

Both the on-campus part which was followed by a field part at Hans Hoheisen Wildlife Research Station, have been a great environment to plant the seeds, which with hard work and nourishment will hopefully turn into forests and fields by the end of the two years.

Certainly, we could experience that the interdependence of human, animal and environmental health cannot be ignored and that cross-disciplinary collaboration is essential. Written by Chiara Trevisan (ITM) with contributions by Mieke Stevens and Marianne van der Sande (both from ITM) and Marinda Oosthuizen (UP). Photos by Helga Bodges(ITM). 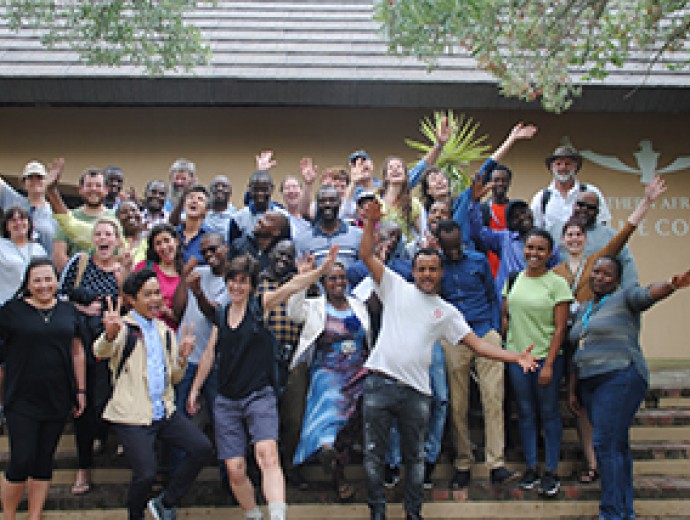