A UP researcher has described a new flightless dung beetle discovered in the Cederberg mountains of the Western Cape. The new and tiny beetle measures at just 3.4mm long, is flightless and has rounded sides with no spine on the sides of its wings, making it a new dung beetle species. This is only the second known member of the genus Silvaphilus.

The new species was discovered by Gimo Daniel of the National Museum in Bloemfontein and Werner Strümpher of the Ditsong National Museum of Natural History. They used pig dung-baited traps while looking for other dung beetles in the Cederberg Wilderness Area in the Western Cape.

"When they found the tiny dung beetle, they suspected that it might be a new species, so they reached out to me to identify it," says Christian Deschodt, who, as a taxonomist at UP's Department of Zoology and Entomology, is a leading expert in dung beetles occurring in southern Africa.

"Years of experience goes into recognising and describing a new species of dung beetle, and specific criteria have to be met for it to qualify as a new species," says Deschodt, who has been researching dung beetles for over 20 years.

Deschodt is excited by the new species discovery. Still, he worries that since the new dung beetle is only known from one particular area in the Cederberg Wilderness Area, which is a unique type of vegetation of fynbos, it might not exist anywhere else on earth. This would mean that if the area is disturbed in any way that might negatively interfere with the dung beetle's habitat, the new species might be lost to the world without science knowing more about it.

"Strict criteria have to be met before a species can be said to be endangered or threatened, and we would need to do more research to find out if it exists anywhere else," says Deschodt. "We still need to know more about its role in the ecosystem and how it interacts with its environment." 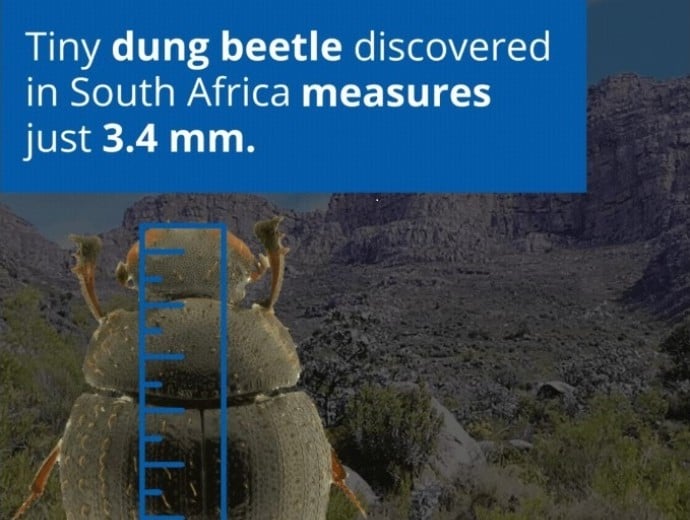