A group of UP Marketing Management graduates were afforded the opportunity to attend the Loeries Creative Week, held at the Durban International Convention Center from 22 to 25 August 2019. This follows their successful development of an educational experiential campaign for the Gautrain Management Agency (GMA) during their honours studies in 2018.
The aim of the campaign was to creatively and unobtrusively educate Gautrain riders across all nine stations about proper rider etiquette on the Gautrain rail system. Two student teams, namely Atlas Advertising and Nexus Marketing, were then selected by the GMA to respectively implement their campaigns during the months of September and October 2018, at the Gautrain stations. Thus, when entries opened for the 2019 student award categories of the Loeries Awards, which recognises creative brilliance and innovation in the advertising and marketing industry, it was deemed fitting to enter these two student teams. The two campaigns were entered in the Live Communications Student Award category.
Two representatives from each team, along with one of their lecturers, attended the Loeries Creative Week, which is considered the most prestigious creative festival across Africa and the Middle East. This year’s theme was ‘Tell Better Stories’ and over the course of three days, the students were treated to an array of networking events and master classes, hosted by brands such as Brand South Africa, Nandos, Vodacom, Dove and UNWomen, as well as a student portfolio expo courtesy of Woolworths and the DStv Seminar of Creativity. The seminar featured several renowned thought leaders across the advertising, marketing, and design realms, including a special talk on personal branding by internationally acclaimed South African hip-hop artist AKA. The Loeries Creative Week was then capped off by the illustrious two-day awards ceremony, which celebrated the best creative work launched in Africa and the Middle East between 1 June 2018 and 31 May 2019. On the red carpet at Friday’s award ceremony
From left to right: Sandile Sisulu, Megan van Schie, Jade Verbeek (lecturer), Ashleigh Lloyd, Ahmed Elbeiti Abelmoniem
Attending the Loeries Creative Week was an unforgettable experience for the students and a true testament to the hard work and creative effort that went into crafting each of their respective campaigns. Although the students did not bring home the award, they did return inspired, motivated, and eager… to Tell Better Stories. 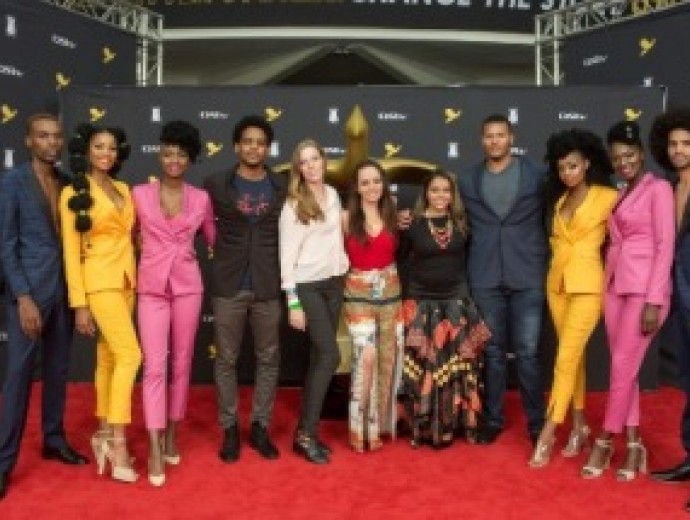