Driven To Succed: Professor Melanie Wiese, from the University of Pretoria, with the 32 taxi owners and drivers from the Eastern Cape and KZN who earned business management and administration certificates at their graducation ceremony in East London on Tuesday.
Taxi drivers are breaking the stereotype that minimal requirements are needed to make it in SA’s biggest public transport system. On Tuesday, 32 taxi owners and drivers from the Eastern Cape and KZN were awarded business management and administration certificates from the University of Pretoria (UP), at the Osner Hotel.
The one-year courses are a R25m partnership with Toyota, aimed at educating people in the taxi industry. Toyota’s senior manager for state and taxi business, Parks Moraladi, said they had developed a programme in conjunction with UP that was specifically customised for the taxi industry. “Three years back we interacted with the industry and discussed what we could do to contribute, and we recognised there was a need for a formal education system for them.”
The project was meant to end in 2018 but will be extended for another three years due to the positive feedback. “The programme has been running for three years but because of appeals from the industry to say we have only been able to train about 600 people in a sector of about 45,000 people, we agreed to continue with the programme for the next three years.”
Moraladi said R34m would be spent in 2017, as they would also introduce more modules to the course. “We agreed that those who have attended the programme in the past will get a step-up programme.”
Participants were nominated by their taxi associations. “They have now started to run their businesses in a more professional way; they know how to interact with the banks and their customers,” he said. UP economics and management sciences professor Melanie Wiese said they had taught budgeting skills, basic computer literacy and branding. “We taught them fleet management, leadership, HR practices to formalise the hiring practices and a finance comquired ponent so they can understand and interpret financial statements.”
She said the course was split into three weeks over the year. “We split it so it does not take too much time because they also have families and a job. The participants were reout to complete all the modules in order to graduate. “It is always wonderful that we have learnt from one another, they also shared the complexities and struggles of the taxi industry and it helps us to adapt our course to help more with their needs,” she said. They also planned to roll the project out to queue marshals and money collectors.
National Taxi Association (NTA) EC chairperson Khungeka Thafa said: “We thought the taxi industry was only for the uneducated and we treated the industry with violence, but now, as we are getting educated, we can do our own budgets and each rank we will be able to sit down and discuss issues.”
Monde Gxaxisa, a taxi driver from Mthatha, said: “This has taught me the importance of being in the transport industry, how to manage my money and how I must behave and dress when I transport people, and even how to handle the car that I am driving.”
''They now run their businesses in a more professional way". Parks Moraladi - Toyota’s senior manager for state and taxi business.
This article was originally published on Daily Dispatch on 14 Nov 2018. Read the original article.
- Author Bhongo Jacob
Share this page
Published by Liesl Oosthuizen 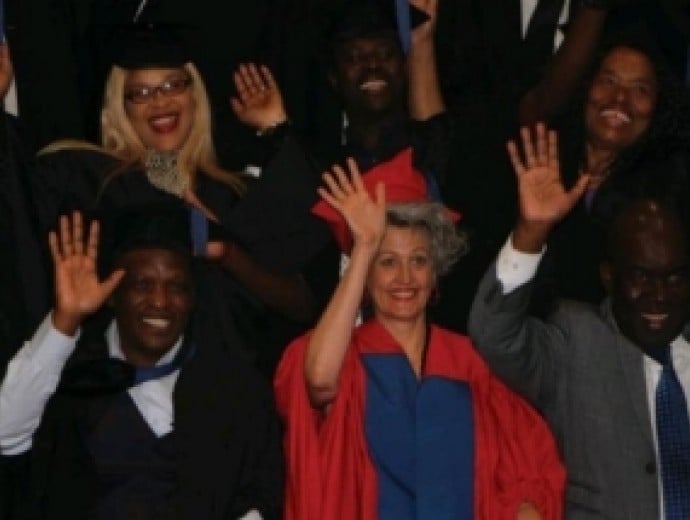 Professor Melanie Wiese, from the University of Pretoria, with the 32 taxi owners and drivers at the graduation ceremony in East London.