Marketing third-year students rewarded for their performance on practical project

The Department of Marketing Management at the University of Pretoria collaborated with Bridgestone South Africa (BSAF) on the Integrated Practical Project for a third consecutive year. The project of this year focused on the tyre fitment centre brand Supa Quick. The successful completion of the module was celebrated at a beautiful prize-giving function recently hosted at the Club Hall. The festive occasion was attended by the third-year students, the lecturers Mrs Laureane du Plessis and Dr Tania Maree, Prof Yolanda Jordaan (Head of the Department), and Bridgestone representatives Ms Thandeka Ngoma (Chief Marketing Officer) and Ms Nthabiseng Mogane (Brand Manager), as well as the Brand Manager of Supa Quick, Ms Desiree van Niekerk.
The function commenced with a welcoming by Dr Tania Maree, followed by an address by Prof Jordaan. She compared the students’ journey to a tyre fitment centre, with all its functionalities and offerings. She concluded her message with words of appreciation for the students’ efforts and also for the continued support of Bridgestone. Thereafter Ms Thandeka Ngoma shared her message of encouragement with the students for their future, as well as words of wisdom to motivate the students. A PowerPoint presentation featuring the student teams’ reflections on their practical projects was shown, with much appreciation from the audience. The students also shared their views and experiences and expressed their gratitude for the opportunity to engage with an industry client.

Prof Yolanda Jordaan; two students (Altia Peenz and Jacques Vorster) sharing their experiences; Ms Thandeka Ngoma
Having concluded the speeches, the awarding of prizes commenced. Dr Maree announced a few fun spot prizes, which were handed over by Ms Mogane. Treats were won by Umlilo (Team 11) for the “Supa Snappy Reflection Collage”; the “Supa Sharps” prize for the best dressed presenting team throughout the year was won by Team 14 known as The Rolling Stones; the “Supa Improved Presenters” prize was awarded to Team Sopa (Team 12); and the “Supa Creative” prize for the best creative idea was awarded to Tribe X (Team 9) for their “Toddler terror” advertisement. Lastly, the “Closer to you” prize for the team who placed fourth in the overall project, was won by the Supa Sleeks (Team 5). From left to right: Brittni van Zyl, Jane Heyn, Ms Desiree van Niekerk, Tuscany Kitch, Ms Thandeka Ngoma, Lloyd Makua, and Tanay Gopal. Team member absent: Eckardt Stander
Having concluded all the formalities, the guests mingled sociably while enjoying a wide variety of finger snacks, prepared and beautifully served by Pure Café outside on the balcony of the Club Hall. The students also used this time to reminisce and network with the representatives from Bridgestone and Supa Quick.

The third-year Integrated Practical Project class, Bridgestone and Supa Quick representatives, HOD of Department of Marketing, and lecturers
The successful completion of the Integrated Practical Project challenge of 2018 is a testimony to the students’ knowledge, insight, and creativity. Their hard work resulted in well-crafted strategies and action plans for increasing awareness of the Supa Quick brand. The Department of Marketing Management is very grateful to Bridgestone for the continued support. We celebrate the successful conclusion of this year’s project, and proudly anticipate that our students will change the marketing world.
- Author Marketing Management
Share this page
Published by Gontse Mosese 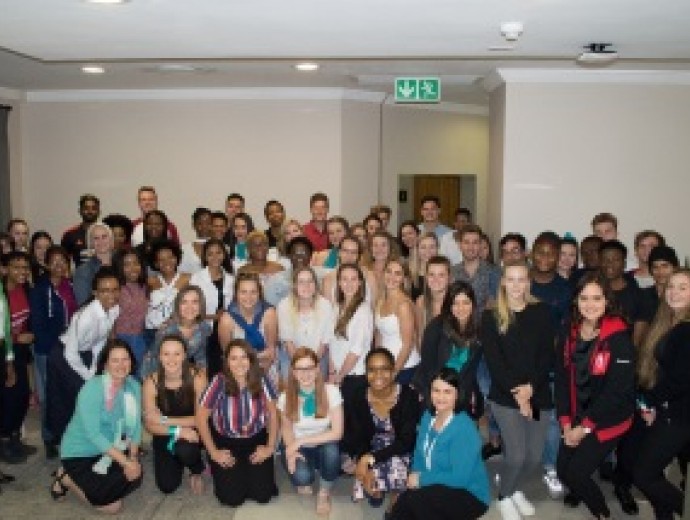