In 2009, Dr Cindy Harper, Director of the University of Pretoria (UP) Veterinary Faculty’s Veterinary Genetics Laboratory (VGL), established a method to obtain a DNA profile from a rhino horn. Poaching of rhinoceros for their highly valued horn was only beginning to show signs of increasing at the beginning of 2009. As poaching of rhinoceros rapidly escalated during the next few years, Harper, together with investigators from the Kruger National Park and the South African Police Forensic Science Laboratory in Pretoria, considered how the discovery could assist with the protection of rhino in this international war.

A unique DNA profiling database of individual rhinos, named the Rhino DNA Index System or RhODIS® was developed. The name was derived from the FBI’s human DNA database, CODIS. RhODIS® is a collection of DNA profiles and samples of live and poached rhinos, as well as stockpiled horns, used to assist with tracing recovered rhinoceros horn and evidence items back to a specific poached animal. The data on the RhODIS® database can also be used to support the genetic management of live populations in the future when poaching pressure decreases. Sample collection kits have also been developed as part of the RhODIS® project in order to ensure that all samples are collected following chain of custody requirements. An app to assist with field sample and data collection for RhODIS® has also been developed recently by the VGL and has been given the fitting name eRhODIS.

DNA evidence is a valuable forensic tool in criminal investigations, and rhinoceros DNA has also played a vital role in many rhinoceros poaching cases since the start of the RhODIS® project. The method to retrieve DNA from rhinoceros horn has been very successful and it can be done from less than 0,1 mg of horn and thus provides the trace evidence needed to link poachers back to the scene of the crime. Rhinoceros DNA evidence from RhODIS® was first used in a rhino poaching case in 2010 and resulted in a Vietnamese citizen being sentenced to 10 years imprisonment for having rhinoceros horns from poached rhinos in his baggage when he was apprehended at OR Tambo International Airport. RhODIS® also contributed to two poachers being sentenced to 29 years imprisonment each. One of the aims of the RhODIS® project is to get all rhinos across Africa onto the database. Considering there are only an estimated 25 000 rhinos left, this is a fairly feasible target. RhODIS® contains DNA profiles and samples of rhinoceros not only from South Africa, but also from other African countries (including Namibia, Malawi and Kenya) with whom a memorandum of understanding has been established.

The South African Department of Environmental Affairs (DEA) initiated amending legislation to require samples to be collected from all poached rhinos and other rhinos that are immobilised or die, using RhODIS® kits. All kits need to be submitted to the VGL for inclusion onto the RhODIS® database. The VGL also offers training on RhODIS® procedures to the South African Police Service (SAPS) investigators, prosecutors, government’s Green Scorpions, veterinarians and wildlife officials.

This UP initiative has not only received international acclaim, but is supported by South African provincial authorities involved in rhinoceros work, the DEA and the SAPS. A recent trip to India by Dr Harper to promote the use of the RhODIS® programme to protect their greater one-horned rhinoceros was well received by the government of Assam and Indian authorities. Dr Harper notes the value of having all rhinos across the world on one database because horns from all over ultimately end up in the same consumer countries.

The fact that this UP initiative has gone global is truly remarkable. The VGL hosted an international training course on RhODIS® on behalf of the International Consortium on Combating Wildlife Crimes (ICCWC) and the DEA in November 2013. RhODIS® has been recognised by CITES (The Convention on International Trade in Endangered Species of Wild Fauna and Flora) for its role in assisting with tracking wildlife products and prosecuting international wildlife criminals.

While DNA profiling is an important tool in the fight against rhinoceros poaching, the future for rhinos remains bleak. In a war fuelled by greed, the number of rhinos is rapidly decreasing, while their horn is increasing in value exponentially.

Radical solutions will have to be found to save the species from extinction, whether this means providing an alternative market through the legal sale of the horn or embarking on a campaign to educate consumer countries. However, control and management of any legal system is imperative and DNA identification and traceability will play an important role in such a process. With over 500 rhinos already slaughtered in South Africa this year, time to find the solution is rapidly running out. 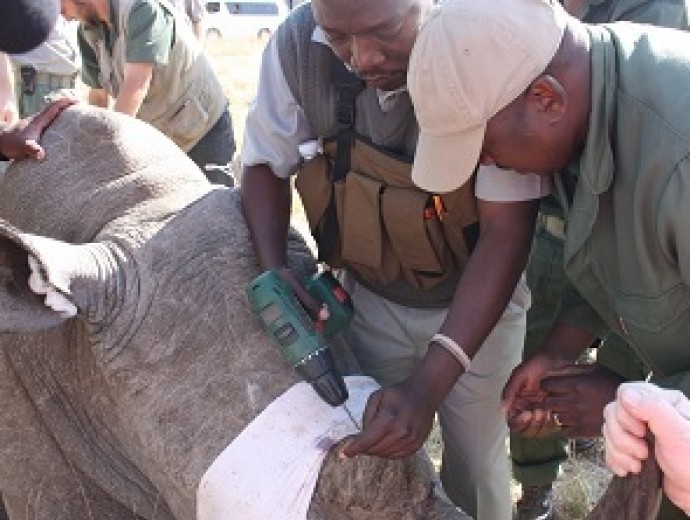 Less than 0,1mg of rhino horn is needed for DNA profiling