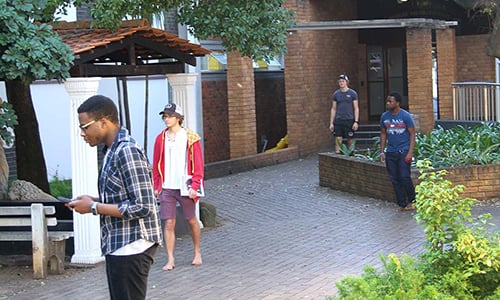 Welcome to the oldest residence at the University of Pretoria

The first students at the "Transvaal University College", as it was then known, were housed in a house in Skinner Street, the Kaya Rosa. In 1914 construction of a men's residence on campus was started, and in 1915 the first residents moved in. The residence was referred to as "the hostel at the college" and so Kollege got its name.

Through the years, College has been responsible for many contributions to the Tuks culture. For example, the University Anthem, the University Coat of Arms, the Tuks rugby jersey, the mascot Oom Gert and the University's newspaper "The Perdeby". In 1959, the university started construction of a new men's residence on the experimental farm. During a house meeting it was decided that College would move to the new building. The new building was known as "New Kollege" and in 1960 Kollege moved into it.

The House Parent or Chairperson of the residence may be contacted for any residence-specific enquiries.

Stay in touch and follow our residence's activities, projects and fun.

Make sure that you are fully informed on our residence rules, regulations and traditions we follow.