The School of Medicine in the Faculty of Health Sciences at the University of Pretoria (UP) has a long and proud tradition of producing excellent doctors for our country, and the Class of 2017 is no exception. On Friday, 24 November 2017, 235 final-year medical students, dressed in their finest and supported by friends and family, took the oath of their profession at a ceremony held in the Aula on the Hatfield Campus, thus taking the first step on their journey as medical professionals.

According to Prof Tiaan de Jager, Dean of the Faculty of Health Sciences, the ceremony is a highlight of the academic year and a life-changing experience for medical students. 'What students learn while studying at UP puts them at the forefront of their discipline and at the frontier of research and clinical practice. Health Sciences is the most rapidly developing Faculty with respect to academic excellence,' he says.

Prof Jannie Hugo, Head of the Department of Family Medicine at UP, welcomed the students to the event, saying that he had every confidence that each student in the group was qualified to perform equally well in an operating theatre, on a visit to a patient in an informal settlement, or in any other situation that they might be presented with. Prof Manning said that although the graduands now had the skills required to practise in this noble and honourable profession, they are part of a generation of doctors who enter the profession in a time of enormous complexity and uncertainty. She went on to explain that despite the uncertain times we live in, she believes the training that this high-performing group of new doctors received over the years has not only provided them with the specific knowledge and skills to ensure that they excel, but that it will also imbue them with resilience, flexibility, creativity and adaptability, which will allow them to thrive in today's ever-changing world. Prof Manning continued by saying she had no doubt that all of them had the skills, ability and passion to take their careers forward in whichever direction they chose. She concluded her address by saying: 'When I said, "the future is a foreign country", I think that what I actually should have said was that you are the future.'

Prof Gerhard Lindeque, Deputy Dean of the Faculty, and Chair of the School of Medicine at UP, talked about the importance of trust and ethics in the health profession before leading the students in the taking of the oath of their profession. This emotional part of the ceremony concluded with each student being invited onto the stage to sign a statement of their oath and to be acknowledged for their academic performance during their years of study. Judging by their reactions, there were more than a few very proud parents, friends and other family members in the audience, some of whom travelled a long way to share in the students' big moment.

The University extends its heartfelt congratulations to the newest group of doctors in South Africa. We know that your hard work will pay off and enable you to make a valuable contribution to society. 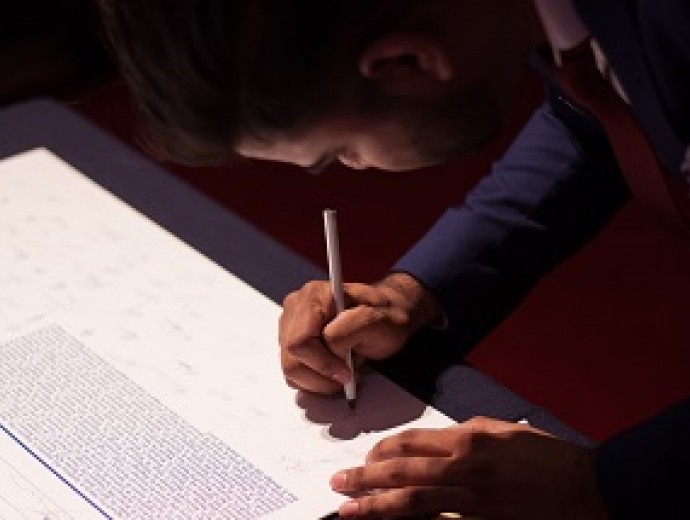