On the heels of UP’s anti-discrimination week and the Faculty of Theology and Religion’s various activities during this week, it is clear that awareness about gender justice is increasing. This is an urgent necessity. South Africa has some of the highest statistics with regard to gender-based violence in the world. The church is unfortunately not exempt from this.

During 2019, the Centre for Sexualities, AIDS and Gender (CSA&G) at UP in cooperation with the Transformation Office, presented two anti-sexual harassment workshops in the Faculty, one of them during UP’s anti-discrimination week. The workshops highlighted the cause and effect of gender-based violence and works toward creating awareness of the dangers of gender stereotyping. During the workshop a comprehensive overview of what constitutes sexual harassment is presented. Emphasis is placed on intervention methods and reporting channels.

For the Faculty of Theology and Religion, creating awareness about gender-based violence and gender justice is also a religious endeavour and a movement, as is illustrated by the Thursdays-in-Black campaign. ‘Thursdays-in-Black’ grew out of the World Council of Churches (WCC) Decade of Churches in Solidarity with Women during 1988-1998. In some spheres of South-African society this campaign has been taken further by civil organisations as well and is represented by the slogan ‘Thursdays in Black: Towards a world without rape and violence’. Thursdays in Black encourages everyone to wear black every Thursday. The campaign recognizes that violence takes many forms, including domestic violence, sexual assault, sexual harassment, discrimination and sex trafficking.

Wearing black on Thursdays helps create awareness and it fosters solidarity in our attempts to create a world without gender-based violence. The photograph is an example of how this campaign is growing from strength to strength in our Faculty, in the hope that it will go campus-wide. 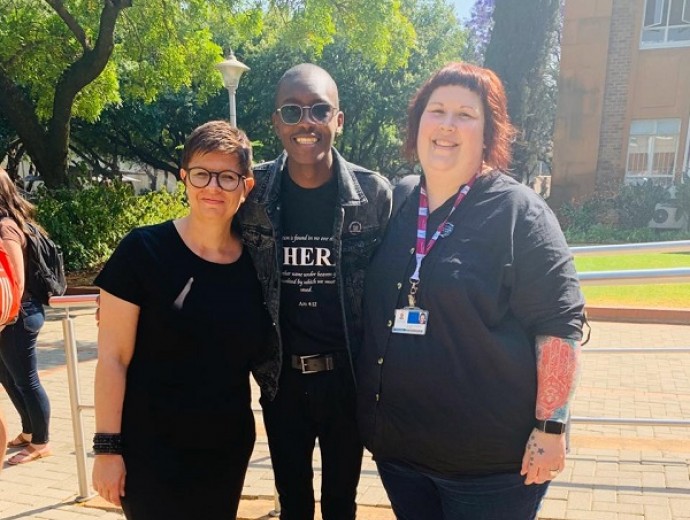