Once a year the Feast of the Clowns transforms the Burgers Park in the inner city of Pretoria into a space of boisterous celebration. Then – black and white, big and small, South Africans and transnationals, homeless and students – all gather to enjoy the first signs of spring, the vitality of local musicians, the freedom of participation, the dignity of belonging, solidarity in togetherness, as they march, chant and protest, naming and resisting death-dealing forces gripping our society. On this day, the March of the Clowns, or jesters, or fools, are led by those who normally take the back seat in society. They usher in a new way of being; they provide a safe and secure space for festivity; they claim the city as theirs, in spaces that were long disowned by many, including those with the capital to effect deep change. Their simple festivity announces a different way: where capital is not God, but God comes in the shape of a frail child or homeless adult.

In a recent research project, we interviewed 60 migrants who arrived in the city within the past 12 months. 90% of them, upon asking if they considered the city to be home, replied in the negative. Either lack of secure tenure, a longing for the ancestral places they come from, or the hostilities of the city, made them feel like perpetual strangers. Of course, if the majority of people see the city only as place of transition, or place of consumption, the levels of ownership, investment and care, will be resultantly low, not boding well for the city’s future and well-being.

Who owns the city that we are in? Who cares for the city? Who creates seats at the table? Who are the courageous ones – jesters indeed – that will tell the emperor, the mayor, the princes of industry, and the intellectuals at our institutions of higher education, when we are naked? Who will make fun of our loftiness when the city is burning, and its poor killed on its streets, whist our buildings stand as empty monuments to incompetence, corruption or bad governance?

The Feast of the Clowns happens only once a year. But every day, we need to see / hear the courageous jesters, at every traffic light and under every bush, mirroring a failed society, because our tables still exclude them. We have disowned our city’s toughest places, and ignored those crying loudest. Will we dare look, and listen, and join the festal protest, by those, themselves disowned, who claim the city from below? Will we disown a city that excludes, and join forces with those who struggle to belong, owning together, a new city, of shared tables, crafted together, resembling something of God’s new, exciting, and disarming household? 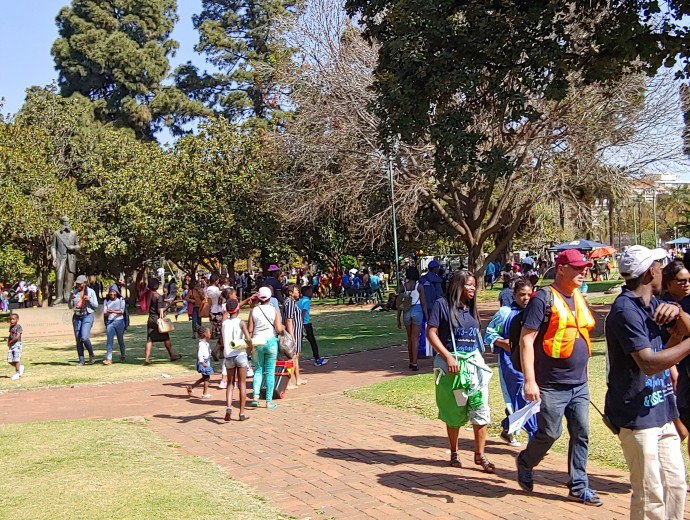