Tuning South Africa to the bat frequency: creating awareness and education through radio and dialogue

The COVID-19 pandemic has put a spotlight on zoonoses and human interactions with wildlife-especially bats. As people generally know very little about zoonoses and bats, it has become imperative to communicate factual information amidst misleading false news. As a research group concerned with identifying and understanding zoonotic risk from bats and other small mammals, the Biosurveillance and Ecology of Emerging Zoonoses (BEEZ) at University of Pretoria Centre for Viral Zoonoses (UP CVZ) aims to spread awareness through discussions and fact sharing with communities.

One of the best ways to spread information in South Africa is through radio which, according to an article by Tanja Bosch (see The Conversation, 2022), amasses listeners comprising 80% of the population on a daily basis. Dr. Mariette Pretorius, a postdoctoral researcher from BEEZ, wrote an article on The Conversation to create awareness of her research to the public. Dr. Pretorius is studying the impacts of land-use change on cave-dwelling bat species. Her article caught the attention of the national and regional radio stations, SAfm and CapeTalk, where she was interviewed to discuss her research. In the interviews, Dr. Pretorius has created awareness about the importance of conserving caves and their surrounding habitats for bats to thrive.

Bats rely on caves for roosting whilst areas outside of caves provide food for bats in the form of insects and fruit. By feeding on a large number of insects and fruit, bats help to suppress insect populations, pollinate flowering plants and disperse seeds of some economically important fruit. Findings from Dr. Pretorius’ research revealed that agricultural and urban expansion are moving closer to caves. As caves lack formal protection, people can easily enter and disturb bat colonies or damage cave ecosystems. Outside the caves, trees are removed as land-use changes reduce fruit trees and transform insect population densities.

Zoonotic risk is another concern when people start living closer to bats. Zoonoses refer to infectious diseases that can jump from animals to humans. These diseases can be transmitted through direct contact with urine, feacal matter, saliva, and the blood of bats. To keep safe from zoonotic risk, it is best to avoid bats. Sometimes it is not possible to avoid bats which makes education about living safely with bats important. Through support from Future Africa, UNICEF, and Defense Threat Reduction Agency (DTRA), the BEEZ printed the book by PREDICT-2 titled ‘Living safely with bats’. The book aims to promote safe interactions between people and bats through simple, practical guidelines that are easy to apply and require minimal resources.

The BEEZ team actively creates awareness about bats by traveling to different schools in South Africa and having discussions about bats and zoonotic risk. To increase reach and understanding about this topic, the 'Living safely with bats’ book has also been translated into Sepedi, IsiXhosa, and IsiZulu.

It is important to create awareness about bats, the impacts of land-use, and zoonotic risk. This helps to develop an understanding of the benefits of bats and the consequences of human actions on their habitats in respect of the economy, environment, and human health. With such knowledge, people can be in a position to make informed decisions when interacting with bats and other wildlife in the future. 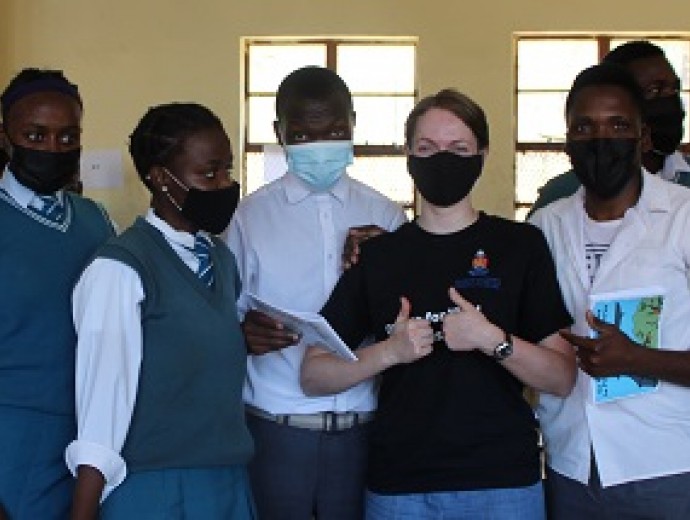