After several months of anticipation, the day of the AESOP and AESOP Plus Workshop finally arrived on Monday, 12 October. The University of Pretoria (UP) is the proud host of the workshop, which showcases some of the latest, cutting-edge 3D technology across a variety of disciplines.

The AESOP and AESOP Plus Workshop is a display of successful collaborations between South Africa and Europe and forms part of the Erasmus Mundus initiative. This initiative offers scholarships to students and staff in South Africa and Europe to engage in research, staff exchange programmes and postgraduate study opportunities. Member universities of this consortium include leading tertiary institutions in Belgium, the UK, Spain, France and several universities in South Africa. South Africa’s membership certainly reflects the high regard in which South African academia is held by the international community. The initiative has benefitted many people since its commencement in 2011, with roughly R28 million being awarded to projects. About 50 staff and students from UP are currently involved in programmes of the consortium. UP encourages its staff and students to use these opportunities to improve their experience and qualifications abroad and build international networks for future collaboration.

The opening of the four-day workshop was attended by the French Ambassador, Her Excellency Elisabeth Barbier; special representatives and honoured guests from the National Research Foundation (NRF), the Department of Science and Technology (DST), and Necsa; as well as eminent academics and an enthusiastic audience.

Prof Stephanie Burton, UP’s Vice-Principal: Research and Postgraduate Studies, said the University was extremely honoured by having been approached by Prof José Braga, professor of Palaeoanthropology at the University Paul Sabatier III in Toulouse, to host this internationally acclaimed workshop. ‘This workshop is designed to expose staff and students to cutting-edge 3D technologies in the South African context and is likely to showcase diversity as an incentive for new training and career developments in the human and natural sciences,’ she said.

A wide range of topics will be covered during the workshop in different sessions by a variety of experts. With the theme, ‘Heritage and the past’, it is only fitting that the workshop is hosted in South Africa. The European Union (EU) recognises South Africa’s rich heritage and embraces the opportunity to join hands to strengthen research and enrich the human and natural science disciplines. Prof Burton also mentioned the opportunities for networking and establishing new contacts and collaborations offered by the workshop.

The French Ambassador, Her Excellency Elisabeth Barbier said it was a great pleasure to be part of such an event and to be one of such an impressive list of speakers. Focussing on archaeology, one of the disciplines covered by the workshop, Ambassador Barbier noted its importance in today’s society. Archaeology serves as a bridge between research and training and between the natural and human sciences and also enables transformation. ‘Archaeology opens up the path to a common heritage,’ she said. Echoing the sentiments expressed by Prof Burton, Ambassador Barbier expressed the hope that the workshop would bring about fruitful exchanges and renew collaborations to facilitate further research and enrichment in the fields of natural and human science.

Among the other dignitaries who spoke at the opening was Prof Francis Thackeray, who acknowledged the 20-year collaboration between South Africa and France in human palaeoanthropology. Recognising the importance and advancements of 3D technology, Prof Thackeray reflected on the early use of CT scans on Mrs Ples. Thanks to this technology, Prof Thackeray and colleagues were able to confirm the theory of famous palaeoanthropologist Prof Phillip Tobias that early hominids had the capacity for speech.

Mr Daan du Toit from the National Department of Science and Technology (DST) said the South African government regards the growth of science in South Africa as a factor of key importance. ‘The DST hopes to expand international collaborations and solidarity, and events such as this are essential to make this possible,’ he said.

The workshop will certainly give attendees insight into a variety of disciplines and cutting-edge technologies in a South African context. Hopefully it also serves as an incentive for new training and career development collaborations between South Africa and Europe. 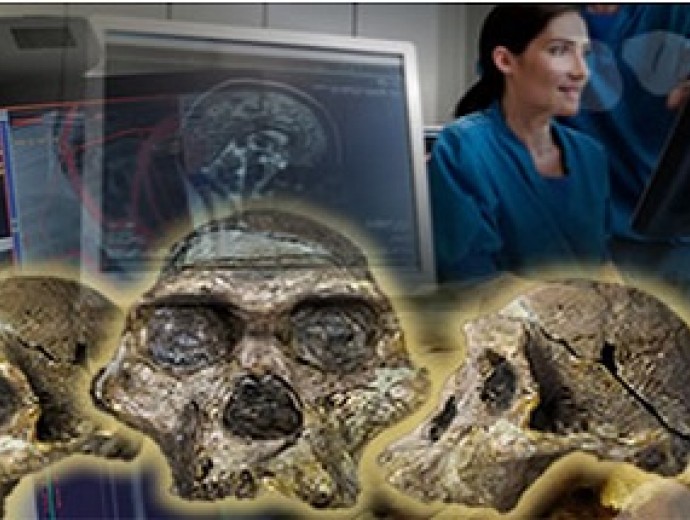