According to the World Health Organisation (WHO) thousands of children across the globe are victims of homicide annually, despite the right to protection and care afforded by the United Nations Convention on the Rights of the Child.

Sadly, South Africa is not an exception where this phenomenon is concerned. Incidents of children falling victim to sexual abuse and homicide have reached endemic levels in our country. Statistics indicate that three children are murdered in South Africa every day and, according to the 2014 issue of the South African Child Gauge (an annual report published by the University of Cape Town’s Children’s Institute), more than 50% of children in South Africa have suffered physical abuse at the hands of caregivers, teachers or relatives.

A national study on homicide, released by the South African Medical Research Council (SAMRC) in 2013, states that fatal child abuse, abandonment of babies and violence among teenage boys are the most common contributing factors in child homicide deaths between the ages of 0 and 17 years in South Africa. In terms of age specific murders, it was found that between the ages of zero and four years, murder victims were more often girls than boys, and that above the age of four, victims were more often boys. Shockingly, according to the report, nearly a third (30%) of these children were killed by their mothers and 35.5% by someone they knew. The report also states that a large proportion of child homicide deaths are thought to be under-detected, largely owing to under-reporting and concealment.

Unfortunately, the fact that these murders are often concealed means that the remains of many children who lose their lives at the hands of those they trust and depend on for care and safety are only discovered after some time has passed. In most of these cases forensic measures are required to identify the remains. Once this has been achieved, investigators can slowly piece together what happened and, hopefully, eventually bring the perpetrators to justice.

The doctoral research of Dr Nanette Briers from the Forensic Anthropology Research Centre (FARC) at the University of Pretoria (UP) will help to identify the remains of unknown children found in South Africa.

When the skeleton of an unidentified child is discovered, forensic artists from the SAPS may resort to doing a facial reconstruction in order to draw attention to the case and to identify the remains. Facial reconstruction uses analyses of the relationships between the facial features, subcutaneous soft tissues and the underlying bony structure of the skull to recreate the face of a person from their skeletal remains. The process requires an amalgamation of artistry, forensic science, anthropology, osteology and anatomy. One of the biggest problems with this technique to date, however, has been the fact that the data available to forensic artists are still very limited in terms of age, sex, and ethnicity. This can greatly affect the accuracy of these reconstructions.

In addition to measuring soft tissue depths, Dr Briers also described patterns of facial growth in primary school children using cephalometric analysis. These growth patterns can be used by police to predict what a child might look like after a period of time has passed. For example, if a photograph of a child at the age of six years is available and the child has been missing for two years, forensic artists may use the photograph along with the growth data to make a sketch of what the child might look like at the age of eight years.

Child Protection Week is observed annually in South Africa. This year it took place from 31 May to 7 June and had the theme, ‘Working together to protect children’. Together we really can and must make a positive difference in the lives of our children – our future. Only by working together can we heal our society and end the unspeakable acts that are being perpetrated against its most vulnerable members. In the words of former president Nelson Mandela, "There can be no keener revelation of a society's soul than the way in which it treats its children." 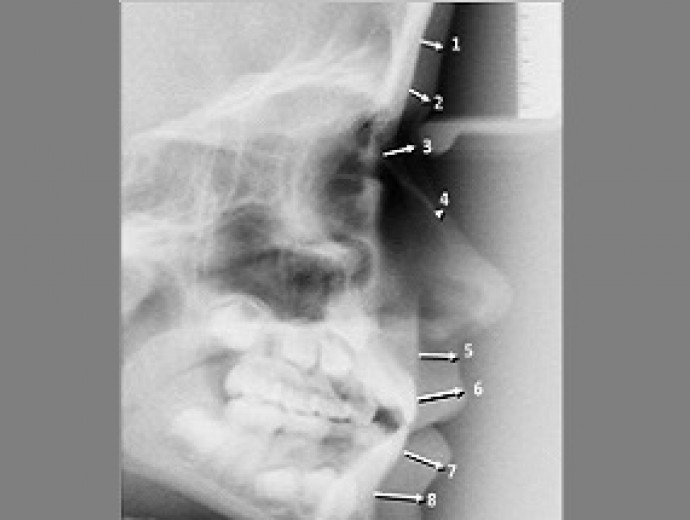 A lateral cephalogram of a child, with landmarks of where the tissue depths were recorded