Chad Anderson, a master’s student at the University of Pretoria’s School of Health Systems and Public Health (SHSPH), is passionate about eradicating malaria in Africa and believes that education will be the key that ends the disease’s deadly reign on the continent. Originally from Illinois in the USA, he joined the Peace Corps, a volunteer programme run by the United States government. He worked as a Peace Corps volunteer (PCV) in Mali until the programme was suspended in 2012, after which he relocated to Botswana where he dedicated much of his service to malaria education and prevention activities.

As part of the 2012 Peace Corps Malaria Heroes Competition, Chad worked with Kabelo Mokgatle, also known as Sentence, (of famous Botswana hip hop clique Fancy Path Music Group (FPMG)), to make a music video called Stomp it out. The video aims to educate young people about malaria. Kabelo and Chad worked with the other members of FPMG to create an original hip hop song, featuring statistics about the disease and the ‘stomp it out’ message. Sadly, during the course of making the music video, they learned that Chad’s host brother from his original Peace Corps service in Mali had passed away from malaria. This devastating news inspired the entire FPMG team to take the disease even more seriously and to continue spreading the message online and at their shows.

After being involved in malaria education and prevention activities in Mali and Botswana for two and a half years, Chad decided that he wanted to continue making a difference in people’s lives through his newfound passion and decided to further his studies at the University of Pretoria (UP). What attracted him to UP was the fact that the University has a well-established malaria-focussed research centre – the University of Pretoria Centre for Sustainable Malaria Control (UP CSMC). The UP CSMC is a fully integrated, multidisciplinary, inter-faculty initiative that aims to coordinate and promote collaborative research on safer and sustainable malaria control and management, and to generate new knowledge and support new activities pertaining to safe malaria control in Africa.

Chad is currently enrolled for a Master’s of Public Health (MPH) at UP and plans to graduate in 2017. He will be working under the supervision of Prof Cheryl McCrindle, an extraordinary lecturer in the School of Health Systems and Public Health. As part of his studies, Chad is working with Prof McCrindle to produce another educational music video, this time aimed at primary school learners. The project is still in the early planning stages, but Chad says that they are thinking along the lines of a song aimed at younger children, combined with a dance, to teach them about simple things they can do to prevent malaria, such as tipping over cans to prevent mosquitoes from breeding in the stagnant water.

‘I want to work on malaria prevention in the future, wherever that may take me. I hope to return to Mali one day and finish the work I started so many years ago,’ says Chad. ‘I have numerous ideas for similar projects, creating songs in local languages with famous artists. I think education is going to be the key that ends malaria, but we must think outside the box to get people to listen. That is why I have been using music to get the message across. I did it in Botswana, and now I'm planning to do it in South Africa. I don't know what comes next, but I do know that it will involve malaria prevention. I look forward to working with Prof McCrindle and with any other professors or professionals who would like to work with me in addressing this issue.’

The UP CSMC has accepted Chad as a member and will include him in all communication on anything related to malaria, such as conference information, funding opportunities, the latest publications and reports, and events hosted by the Centre. 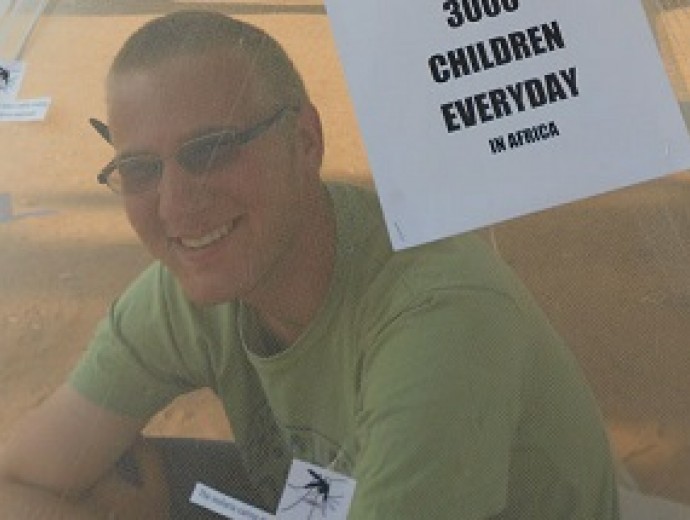