The International Society for Photogrammetry and Remote Sensing (ISPRS) is a non-governmental organisation devoted to the development of international cooperation for the advancement of photogrammetry and remote sensing and their applications. The ISPRS  is a member of the International Science Council and its scientific interests include photogrammetry, remote sensing, spatial information systems and related disciplines, as well as applications in cartography, geodesy, surveying, natural, Earth and engineering sciences, and environmental monitoring and protection.

Six delegates from the University of Pretoria’s Faculty of Natural and Agricultural Sciences travelled to Nice, France, to participate in the XXIV ISPRS Congress which ran from 6-11 June 2022. The Congress takes place every four years and was originally scheduled for 2020. Due to the pandemic, two virtual events were arranged in 2020 and 2021, and the ISPRS community was very excited to finally have a face-to-face Congress in 2022. A daily keynote and more than 1,500 papers were presented. A special forum track addressed hot topics in panel discussions. UP delegates contributed to the state-of-the-art on current trends in science, technology and business and had the opportunity to meet and network with experts and cross-fertilize with peers from all over the world.

Dr Adedayo Adeleke, a lecturer in the Department of Geography, Geoinformatics and Meteorology, presented one of his Honours student’s research projects, titled “Developing Spatial Decision Support System to Assess Traffic Congestion in the City of Johannesburg”.

The poster by Azile Mdleleni, a PhD student in Geoinformatics, showed how one can visualise life in an informal settlement of South Africa using web maps and story maps. This research was supervised by Dr Victoria Rautenbach and Prof Serena Coetzee. Azile also participated as a panel member on the forum about openness and innovation in Geomatics and Earth Observation.

Nicholas de Kock presented a poster titled “Towards an Open Source Python Library for Automated Exploratory Spatial Data Analysis (ESDA)”. This was a result of his Honours project, which evolved into his current research for his MSc Geoinformatics, supervised by Dr Victoria Rautenbach. The Python library resulting from this research enables the user to generate a detailed ESDA report using one line of code - a process that previously required numerous lines of code and constant user input. The library can be viewed and downloaded here. Nicholas was a finalist for the prestigious CATCON 8 (Computer Assisted Teaching CONtest), which aims to promote the development and dissemination of effective and user-friendly, open-source and preferably non-commercial software designed and used specifically for computer assisted teaching.

Renate Thiede and Prof Inger Fabris-Rotelli exhibited a poster and co-presented their research titled “An Informal Road Detection Neural Network for Societal Impact in Developing Countries”. Renate is a PhD student and part-time lecturer in the Department of Statistics, supervised by Prof Pravesh Debba (CSIR), Prof Christopher Cleghorn (WITS) and  Prof Inger Fabris-Rotelli (UP Department of Statistics), who is an incoming group member for the Working Group on Spatial Data Analysis, Statistics and Uncertainty Modelling in ISPRS Technical Commission IV, Spatial Information Science. This research created a training dataset of informal roads for the purpose of training a neural network to extract informal roads in remote sensing imagery. Informal roads are created by human movement without government approval and typically occur in and around informal settlements. As such, information on these roads is not typically available to government authorities. Extracting information on these roads is critical for improving service delivery and accessibility for the residents of informal settlements. The presentation and poster discussed the process of data collection and quality control, as well as preliminary results from the neural network, which shows an improvement over existing neural networks trained on formal roads.

Prof Serena Coezee represented South Africa at the ISPRS General Assembly and co-organized the forum titled “Openness and Innovation in Geomatics and Earth Observation” with Prof Maria Brovelli from the Politecnico di Milano, Italy. Organisations all over the world are increasingly considering the adoption of open source software and open data. In the geospatial domain, this is no different, and the last few decades have seen significant advances in this regard. Openness has changed the way in which geospatial data is collected, processed, analysed and visualised, leading to many innovative solutions based on open geospatial technologies. Despite changing global political power balances and looming trade wars resulting in some countries to ‘close up’, in most parts of the world there is a strong sentiment towards openness linked to scientific activism by citizens and a trend by governments to publish open data. The panel discussed if and how openness will continue into the foreseeable future, how the concept and practice of openness would be impacted by deep learning, big data and cloud computing developments. Panel members included seasoned academics and the younger generation of students and researchers, as well as representatives from the United Nations, the European Joint Research Centre, the European Space Agency, the Open Geospatial Consortium, and NGOs and companies actively working with open source software and open data. 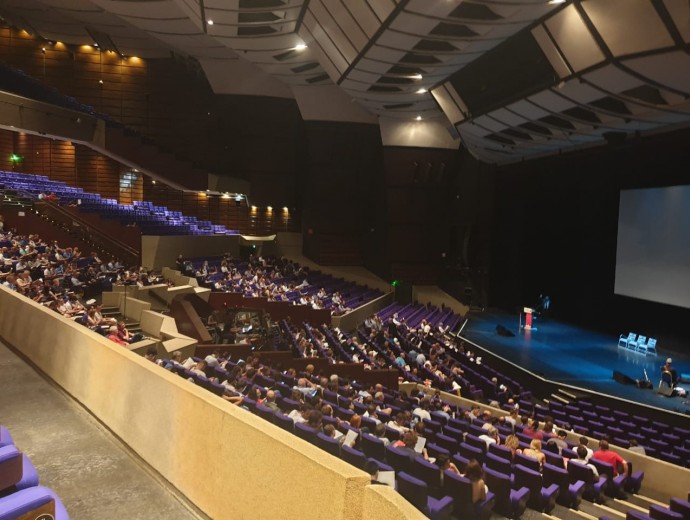 Delegates came from all over the world to attend the plenary sessions of the XXIV ISPRS Congress in Nice, France