DHHS Postgraduate Reflects on the meaning of Women's Day today

As we celebrate national Women's Day, on 9 August, in a society menaced by violence against women (and children), economic hardships and political malaise and malfeasance, it is perhaps timely to remember the many, and different, sacrifices women have made in both the domestic and public sphere.

This brief reflection focuses on one aspect of this sacrifice, namely the political incarceration of women and the associated violations of privacy, dignity, brutality and the separation from families and loved ones. While national holidays such as Women’s Day offer us, as a society, a day of remembrance, public speeches by politicians and numerous op-eds, in the larger context of South African society, this one day is perhaps dwarfed by the daily reminders of the continued violations women experience.  But until we reach a point where violence against women is the exception rather than the norm, we have a national Women’s Day on which to praise and celebrate the many strengths of women, as well as to remember the numerous sacrifices, both small and large, women have made, and continue to make.

The Constitution Hill Women's Prison was one site where women experienced violence and violation.  During the apartheid era Black women were incarcerated for crimes ranging from theft and murder to illegal alcohol brewing, refusing to carry a pass or being with a member of any of the banned political organisations such as the Communist Part of South Africa (banned in 1950s), the ANC or PAC (both banned in 1960). The Constitution Hill Women’s Prison housed many prominent (and not so prominent) women anti-apartheid activists.  Albertina Sisulu, Winnie Madikizela-Mandela, Barbara Hogan and Fatima Meer are a few of the women who were incarcerated at the Women’s Prison.

Fatima Meer was one of the first women to be banned in South Africa for her role as an organiser and speaker in the 1952 Defiance Campaign. During the time of her ban Fatima Meer became one of the founding members of the Federation of South African Women (FEDSAW) in 1954. In 1976, in the wake of the Soweto student uprising, she was incarcerated in Constitution Hill Women’s Jail for six months without trail. In 2017, Fatima Meer’s prison art, was showcased at the site of Constitution Hill Women’s Jail and it still stands today as a memorialisation of women’s experiences of imprisonment.

The representation of the apartheid struggle tends to take a gendered perspective. For example, in the typical interpretations of the struggle, women usually end up taking the role of ‘mother of the nation’ or nurturers. Fatima Meer’s paintings challenge the stereotypical portrayal of the history of South Africa’s anti-apartheid struggle with its predominantly male focus. Meer’s artwork gives us a glimpse into the lived realities of incarceration for women. The artworks showcase the physical space of the jail as well as both mundane routines and female solidarities that were forged among imprisoned women.

As archival evidence, the artworks provide a glimpse, albeit through one woman’s gaze and perspective, of a history that requires more engagement with women’s experiences of political resistance and imprisonment.  Engagement with these artworks requires us to remember both, the sacrifices of women, and their continued violation in a society struggling with violence on a scale that is truly horrifying. These artworks, as well as other archival traces, such as letters, and most importantly, the memories of those still alive, speak to the sacrifices that women incarcerated in Constitution Hill Women’s Jail have made, and indeed it was a sacrifice of their human dignity.

The treatment of the women in the prison was cruel; inmates were subjected to mental and physical abuse. They were not supplied with underwear and sanitary pads, for example. There were communal outdoor showers that supplied only cold water. Furthermore, these showers were visible from Johannesburg’s surrounding office blocks. Their rights to privacy and good health were infringed, making the conditions of their incarceration inhumane. The Constitution Hill Women’s Jail Museum, provides a historical record of women’s experiences of incarceration and highlights the gendered aspects of discriminatory apartheid laws.  Constitution Hill Women’s Jail represents a part of history in which women were systematically incarcerated for everyday, ordinary actions, these actions were encoded as political activity under the discriminatory apartheid laws.

Meer’s paintings, and the Women’s Jail itself, have an important role in changing the understanding of how trauma, suffering and incarceration are subjectively gendered experiences. Meer’s paintings challenge the dominant narratives of women’s role in the anti-apartheid liberation movements, and women’s participation in socio-political movements more generally. The paintings provide an alternative narrative from the narrowly constructed representations of the anti-apartheid struggle and indeed illustrate the sacrifices that women have made by showing the cruel realities of prison life.

Motlatjo Mogoboya is registered for an Honours degree in History at the University of Pretoria.  This is drawn from her Honours research project that focuses on Meer’s paintings of prison life in the Constitution Hill Women’s Prison. 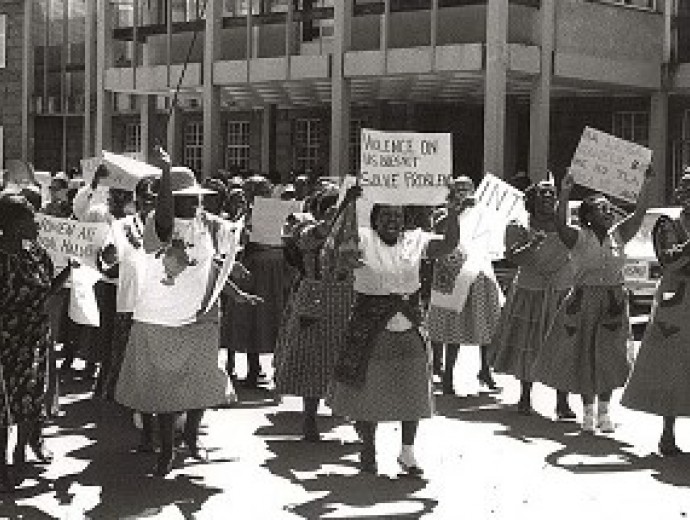