On 14 June 2020, Kevin Smith, a former student in the UP Faculty of Engineering, Built Environment and Information Technology (EBIT), proposed to Ashleigh, his girlfriend of four and a half years. He could have proposed anywhere, but due to the impact campus life had had on him, he decided to do it on campus.

Kevin and Ashleigh are both UP graduates. Ashleigh finished her BSc with Genetics, Physiology and Human Psychology as majors, in 2018, while Kevin completed an honours degree in BCom Informatics in 2019. The couple first met in the Engineering cafeteria in 2015, which is why Kevin felt that it was appropriate to proposal on campus. He said: ‘Four and a half years later I cannot imagine my life without her. Without her support, especially during my final year of Informatics, I would never have come this far.’

Before the big day, due to the restrictions of Covid-19, Kevin had to obtain approval for access to campus from UP security and ensured that he had sanitiser and the prescribed personal protective equipment. To avoid arousing suspicion, Kevin invited Ashleigh to view various properties with him in the morning. The couple arrived on campus at approximately 12:00 and headed for the cafeteria to ‘collect Kevin’s honours degree certificate’. Upon their arrival, Kevin went down on one knee and popped the question.

‘She said yes!!!’ Kevin informed his lecturer, Dr Riana Steyn, and Mr Chris Colyn of UP Security by email. ‘I cannot remember the last time I was so nervous.  I was shaking so much that I was surprised that the ring didn’t fall out of the box!’

After the proposal, the couple took a stroll through the quiet and deserted gardens on campus to celebrate and capture the moment. They felt as if the campus belonged to them alone.

Kevin would like to thank his lecturer, Dr Riana Steyn, for her excitement and support throughout this process and to assure her and the entire Tuks community that they will always remain very close to his heart. 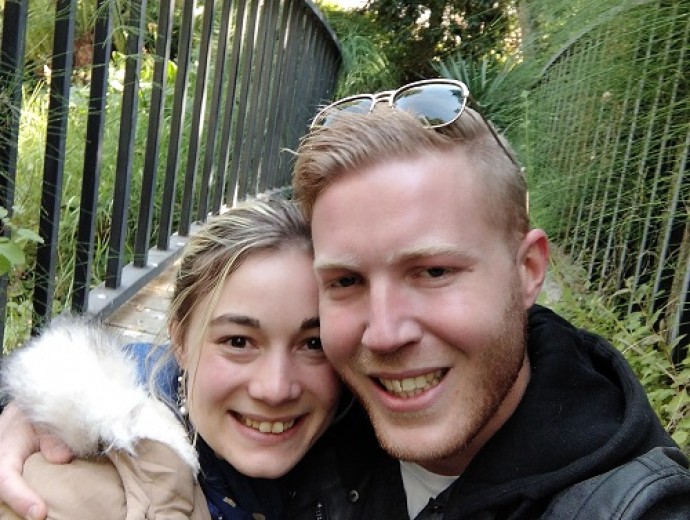