Prof Maharaj, Dean of EBIT and his student, Mr Pandelani Munyai won the Best Paper Award. The title of their paper was, “On the Improvement of Phase Noise Errors in Wireless Communication systems”. Mr Pandelani Munyai is studying toward his Masters in Electronic Engineering and this paper is part of his Master’s degree research work.

Modern wireless communication systems such as 5G and today’s 4G LTE (Long-Term Evolution) are expected to deliver higher data rates. However their performances are heavily impacted by the emergence of Phase Noise (PN) in the transceivers. In fact PN has become an integral part of the Frequency Synthesizer design. In the process of generating carrier waves, the local oscillators of the frequency synthesizers generate an unwanted phase noise that limits the performance of the transceivers. Despite several research advances that sought to mitigate and suppress phase noise errors in radio transceivers, phase noise remains a major problem that limits the performance of wireless communication systems. Phase noise is mainly caused by the oscillators’ inability to produce a single and clean frequency without spurious tones and harmonics. In this paper a modified Fractional Phase Locked Loop Frequency Synthesizer (FPLL FS) architecture that is capable of suppressing unwanted spurs is presented. Simulation results show that the proposed model achieves significantly low phase noise level, below the −145dBc/Hz as published in the recent literature and with also minimal spurious tones in the frequency of interest. The system design and simulations achieved better signal-to-noise ratio (SNR) when compared to the requirements as in the LTE release 8 specifications for the specified modulation schemes.

IEEE Africon is a Region 8 Conference and is held once every 2 years. This year it was held at the United Nations (UNECA) Conference Centre in Addis Ababa, Ethiopia from 14 – 17 September 2015 where around 400 internationally peer reviewed technical papers from across the world was presented.

IEEE is the world’s largest professional association dedicated to advancing technological innovation and excellence for the benefit of humanity. IEEE and its members inspire a global community through its highly cited publications, conferences, technology standards, and professional and educational activities. With more than 426 000 members The IEEE is divided in to 10 geographic regions with Europe, Middle East and Africa designated as Region 8 having about the most number of members. 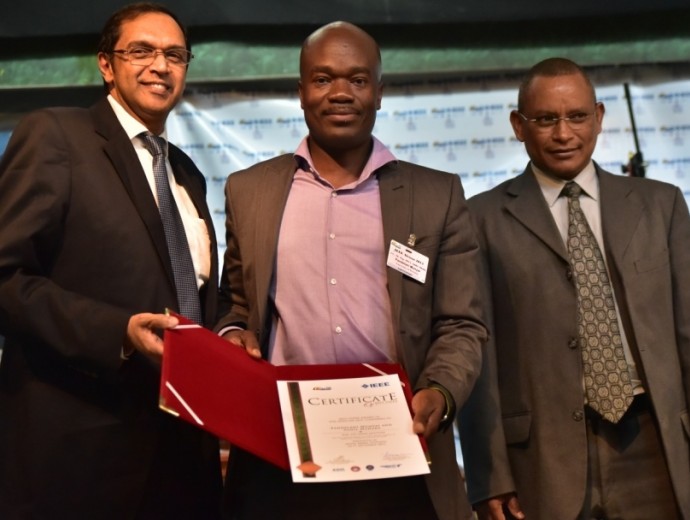