University of Pretoria student, Tatjana Schoenmaker has won the women's 100m breast stroke at the Commonwealth Games on Australia's Gold Coast, in addition to the 200m-breast stroke on Saturday.

In Saturday's race, the Tuks swimmer impressed with her dominance. From the moment she dived into the water it was clear that she meant business. She was in the lead after 50 metres, dropped to second after 100 metres but from then there was no stopping her.

Her winning time of 2:22:02 is more than two seconds faster than the time she swam during last year’s World Student Games in Taipei, where she won the silver medal (2:24:61).

Interviewed on the weekend, 'overwhelmed', is the word Schoenmaker used when asked about her performance. 'To win the gold medal is big for me. At first, I did not realise how fast I had swum. I was just relieved to be the first to touch the wall, but then I turned around and saw the time it was an absolute bonus that made the moment that little bit more special,' said the Tuks swimmer.

She said then: ‘My coach, Rocco Meiring, and I believe in taking things step by step. For now, I am happy….the more I train the more confident I get about my own abilities.’ The Tuks swimmer is undoubtedly in good form. She also set a new African record in the 50m-breast stroke on Friday, swimming 30.82s.

Meiring said: 'I am more cautious than excited. Tatjana has the X-factor when it comes to putting in the hard work and competing. To me, she is like a proverbial “racehorse” so as a coach it is essential to know when enough is enough as the margin of error is so small. What excites me is the way she is capable of producing a really big output when it matters.’

It is clear that Meiring has mapped out Schoenmaker’s 'journey' to the 2020 Olympic Games in Tokyo to the finest detail. He has prioritised her studies. If everything goes according to plan, she will get her degree at the end of the year. Only then does he want her to focus on swimming faster times seriously. 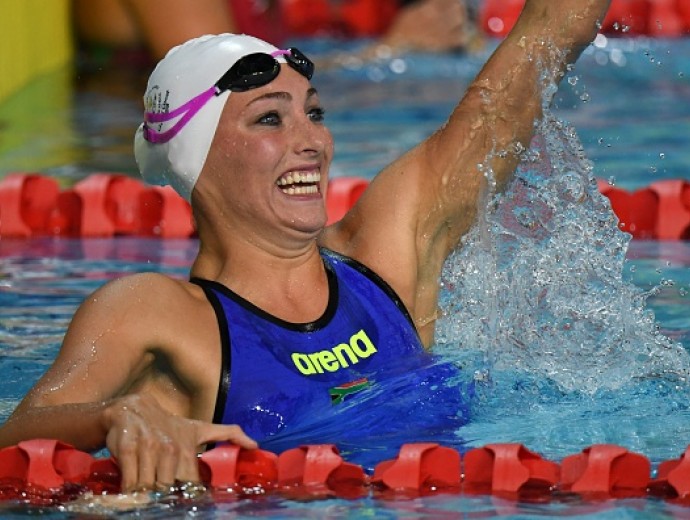