Globally, women researchers are making huge contributions towards the sustainable control and elimination of malaria. At the University of Pretoria Institute for Sustainable Malaria Control (UP ISMC), researchers look at malaria from a holistic point of view encompassing all components of the disease lifecycle, namely the malaria parasite, the mosquito vector and the human host. Through this approach, the Institute creates the opportunity for collaborative research, allowing for transdisciplinary approaches and translational applications towards malaria elimination.

More than 60% of the Institute’s postgraduate students are female, each addressing different challenges of the disease and contributing towards malaria elimination. As Women’s month comes to an end, the UP ISMC wants to acknowledge some of the work done by our young female researchers. The following three young #WomenofUP from the Institute’s three research clusters – human health, parasite control and vector control – reached an achievement in their personal research journeys in 2021, whilst adding to the knowledge growth in the malaria space.

“While malaria is much of a human health problem, it is also intimately connected to environmental and socio-economic variables”, says Maria. Malaria affects vulnerable populations in particular, but the specific conditions for what makes a population vulnerable is still debatable. “Is it their income status? Their household conditions? Perhaps the answer lies in their biology and has to do with their age, health status or gender”. In her MSc project, Maria asked these questions to pinpoint what makes an individual more vulnerable to contracting malaria.

The study was done in a malaria hotspot area in Vhembe District, Limpopo Province. Household surveys were conducted in two villages to collect data about key indicators relating to the villages’ social, economic and, biological conditions. Results showed that the most likely groups to contract malaria were individuals over the age of 65 compared to younger individuals, and households that cooked using wood and fire compared to households that cooked using electricity. Older populations are more vulnerable to malaria due to their weakened immune system that cannot successfully defend against infectious agents. Additionally, when using wood and fire for cooking, excessive amounts of smoke is produced, which acts as an attractant to mosquitoes, thus, resulting in an increased density of malaria vectors and thereby increasing the risk of contracting malaria.

The information obtained from Maria’s research can inform the Malaria Elimination Strategy, as preventative strategies should include tackling indoor air pollution and prioritising the elderly against malaria. Maria, who graduated earlier this year in May, is considering a career in academia. “My research interests will always lie within the context of human health”.

Insecticide-treated bed nets and indoor residual spraying (IRS) are the mainstay in vector control strategies, but these tools target indoor-biting mosquitoes and do not protect people from malaria when they are outdoors. “There is a need for development and implementation of more outdoor malaria control strategies”. For her MSc degree in Entomology (completed end 2020), Takalani investigated the effect of two endectocide drugs, injectable ivermectin and topical fipronil, on the survival and fecundity of zoophilic Anopheles arabiensis, a mosquito species that transmits malaria.

Endectocides are already used to treat parasites such as ticks and worms in livestock and have been found to be effective against the survival and egg production of malaria mosquitoes. Field studies investigating these drugs are limited, and much research is required before the strategy can be implemented. Takalani’s findings propose that cattle/livestock-administered endectocides could potentially be used as an outdoor malaria control strategy if used strategically. This strategy might work in malaria-endemic regions such as the Vhembe District in Limpopo where there are high livestock numbers. Takalani published her results in the journal Parasites and Vectors in July 2021 titled “The effect of cattle-administered ivermectin and fipronil on the mortality and fecundity of Anopheles arabiensis Patton”.

Takalani, born and raised in Vhembe District, is passionate about vector-borne diseases, especially malaria. Her PhD focuses on Rift-valley fever, a mosquito-borne disease transmitted by various mosquito vector genera, including Anopheles mosquitoes. “Vhembe has the highest number of malaria cases annually in South Africa, and I wanted to make a difference and contribute to where I come from”. “My plan is to continue doing malaria research and making a difference. I am honoured in being part of a team that brings solutions in order to eliminate malaria”.

The complex life cycle of the malaria-causing Plasmodium parasites, has two distinct developmental phases: the asexual proliferation cycle that causes symptomatic disease and the sexual differentiation process that drives malaria transmission. Sexual differentiation involves five stages, usually classified into early gametocytes (stage I-III) and late gametocytes (stage IV-V), where mature stage V gametocytes are taken up by a mosquito during a bloodmeal. “Anti-malarials must be able to kill the asexual pathogenic, and also effectively kill the transmissible, gametocyte forms of the parasite in order to be considered truly effective in blocking disease transmission”, says Mariska. To ensure complete transmission blocking, there is a need for the discovery of compounds able to kill both early and late stage gametocytes.

The identification of such compounds requires the development of a robust stage-specific screening platform for gametocyte-selective compounds. Mariska’s research identified possible novel early and late gametocyte markers that were used for the development of a stage-specific screening platform. This can contribute to quicker and easier screening of compounds with gametocyte activity, thereby identifying compounds that will lead to a block in transmission and ultimately eliminate malaria.

Some of Mariska’s findings were recently presented in a research poster at the 6th South African Malaria Research conference that took place virtually on 3 and 4 August 2021. She won the award for best poster at the event. Mariska would like to continue with research in malaria. “My father inspired my interest in natural science and that, plus my curiosity of learning new things, pushed me towards research in order to discover and learn”, says Mariska. “My hope is that my research would contribute to the development of a drug that could change the devastating effect of malaria on people’s lives”.

“These young ladies are leaving their mark on malaria research, contributing towards the malaria elimination agenda, and trying to make a difference in their own way” says Prof Tiaan de Jager, Director of the UP ISMC. “We are proud of our postgraduate #WomenofUP researchers.” 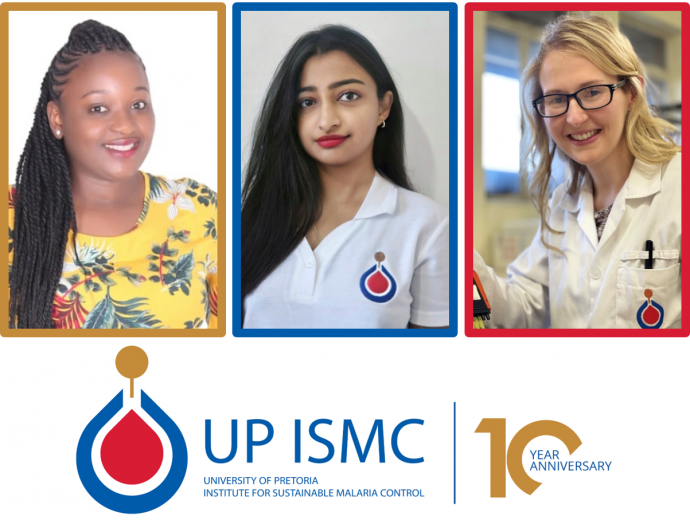