Prof Martin Schwellnus, Director of the Sport, Exercise Medicine and Lifestyle Institute (SEMLI) at the University of Pretoria (UP) is the recipient of the 2017 American College of Sport Medicine (ACSM) International Clinical Scholar Award. This award is made annually in recognition of the top athlete care and/or clinical medicine abstract, or clinical case paper submitted at the ACSM's yearly meeting, which is considered to be the most comprehensive sports medicine and exercise science conference in the world. This year's event attracted around 7 000 delegates and took place in Denver, Colorado, from 30 May to 1 June, with a banquet and award ceremony on the evening of Friday, 2 June, during which Prof Schwellnus received the award in recognition of his submission, titled 'Pre-race medical screening and educational intervention reduces medical complications: A SAFER study in 153 208 runners'.

According to Prof Schwellnus, previous research on the subject has provided irrefutable evidence that regular participation in physical activity has substantial health benefits, and as such, participation in mass community-based sports events should be supported. With that said however, the promotion of physical activity invariably brings with it a higher risk of medical complications, with the risk varying according to the risk factor profile of an individual and the nature of the event. An initial series of studies undertaken by Prof Schwellnus and a PhD student from the University of Cape Town, Dr Karen Schwabe, between 2008 and 2011 (SAFER studies I–III), exposed a relatively high rate of medical complications in a group of 65 865 runners participating in 21,1 km and 56 km races. 'These high rates of medical complications and deaths in runners, particularly 21 km runners, were of great concern to us, and we identified the need to plan strategies to prevent deaths and serious medical complications in these races,' he says.

To this end, Prof Schwellnus and his team developed an online pre-race medical screening questionnaire and an accompanying targeted educational intervention programme, which was then introduced as part of the race registration process at the Two Oceans Marathon from 2012 to 2015. The team, led by Prof Schwellnus (who is also an Emeritus Professor at the University of Cape Town) and comprising members of the Biostatistics Unit of the South African Medical Research Council (Sonja Swanevelder and Esme Jordaan) and Stellenbosch University (Prof Wayne Derman), set out to compare the incidence of medical complications per 1 000 race starters during the post-intervention period (2012 to 2015, 87 343 race starters) to that during the pre-intervention period (2008 to 2011, 65 865 race starters). The results revealed a 29% reduction in the incidence of all medical complications (19% in 21,1 km runners and 39% in 56 km runners) following the introduction of the questionnaire and intervention programme. More importantly, serious medical complications were reduced by 64%.

The pre-race screening and educational intervention programme was subsequently adapted for cycling and implemented by Dr Jannalene Killops, a postgraduate UP student who works for Mediclinic, the official medical supplier for the Cape Town Cycle Tour. Prof Schwellnus and his growing team at SEMLI, including Prof Christa Janse van Rensburg, Head of Section Sports Medicine at UP, are currently collaborating with organisers of other national and international mass-participation events to determine whether this type of screening and targeted educational intervention programme is as effective at reducing medical complications in other sport codes. The information gathered will be invaluable in ensuring the safety of recreational athletes and will enable the organisers of major sporting events and the health-care practitioners that assist them to predict health-related issues on the day of a major sporting event based on the risk factors that can be identified beforehand. This work will make participation in regular physical activity safer for all, and adds new rigour to the discipline of Sport and Exercise Medicine. 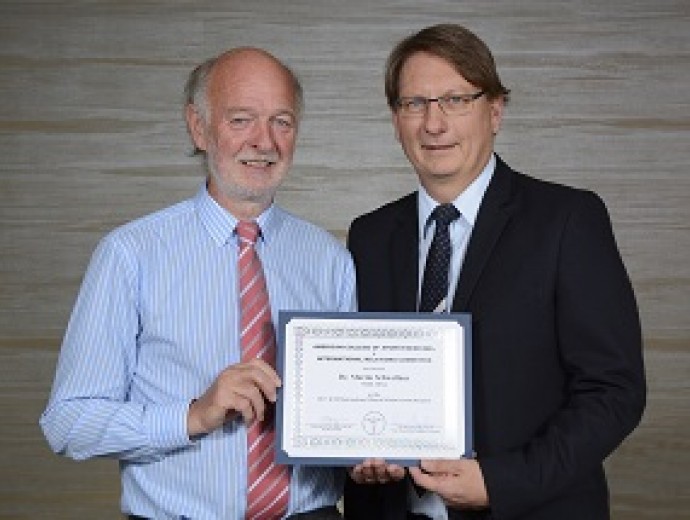 Prof Schwellnus with his award