Malaria retains a strong footprint throughout the tropical areas of the world despite the success of interventions for malaria reduction achieved over the past decade. While Africa bears the brunt of malaria-related morbidity and mortality, with well over 80% of all deaths and case-loads consistently being recorded from this continent, vast swathes of Asia are also burdened with the debilitating consequences of this disease. Asia also has an unenviable reputation as a breeding ground for drug-resistant strains of parasites, having spawned chloroquine-resistant strains of malaria, which eventually spread across the world, as early as the late 1950s. This situation seems to be repeating itself now, with artemisinin-resistant strains entrenched and expanding from focal areas in south-east Asia, notably the Myanmar-Thai border region.

The University of Pretoria Institute for Sustainable Malaria Control (UP ISMC) has identified residual malaria as a theme of particular importance in the battle against malaria, as it is proving to be a persistent challenge for many countries in the pre-elimination and elimination phases. Residual malaria will hinder every country's progress along the path from malaria control to malaria elimination, and so it is a theme that justifies attention and focussed research. One aspect of residual malaria that the UP ISMC has targeted for particular attention is expanded vector control, with particular focus on methods for reducing outdoor infections as well as improved indoor control. Key factors that the institute is looking at are the biting behaviour of the main vector mosquitoes, and novel carrier materials that can be used in different applications with different active compounds to reduce outdoor transmission and minimise the challenges associated with indoor control, such as insecticide resistance.

Recognising that Asia faces many of the same challenges as Africa with regard to vector control, the UP ISMC's Prof Leo Braack recently spent time working with malaria specialists and entomologists in Myanmar, which has one of the highest rates of malaria prevalence in Asia. Myanmar only recently began to emerge from decades of international isolation imposed by its previous military dictatorship, but has a surprising core of medical and malariological expertise supported by a growing network of international academic and NGO partners. Prof Braack spent time in discussions with key persons at the Myanmar Department of Medical Research in Yangon, including Director‑General Dr Kyaw Zin Thant. The highlight of his visit, however, was the opportunity to experience the hospitality and insights of the Deputy Director-General, Dr Myat Phone Kyaw, and Head Entomologist, Dr Maung Mya, who generously accompanied Prof Braack to zones of high malaria transmission in southern Myanmar, assisting with mosquito collection and introducing him to the malaria vectors and vector behaviour in this part of Asia. There are fascinating similarities in the behaviour of malaria vectors in Africa and Asia, despite the considerable diversity and complexity of vector species in this region.

The insights obtained during the fieldwork and from the discussions and, most importantly, the links to key persons and the goodwill established for collaborative work, have laid the foundation for productive research and training by way of PhD students and exchange visits. The research that is already underway at the UP ISMC on exploiting the biting behaviour of vectors for improved malaria control, and on the development of new materials and new combinations of compounds for incorporation in such materials, can usefully be applied in Asia. The collaboration with the Department of Medical Research in Myanmar builds on the partnership with China that was established in 2015 – in particular, the Memorandum of Understanding for collaboration in malaria research, signed with the Chinese Centre for Disease Control and Prevention. Prof Tiaan de Jager (Director: UP ISMC) and Prof Braack have been invited to give presentations at the 3rd Symposium on Surveillance-Response Systems, which will take place in Shanghai, China in June. 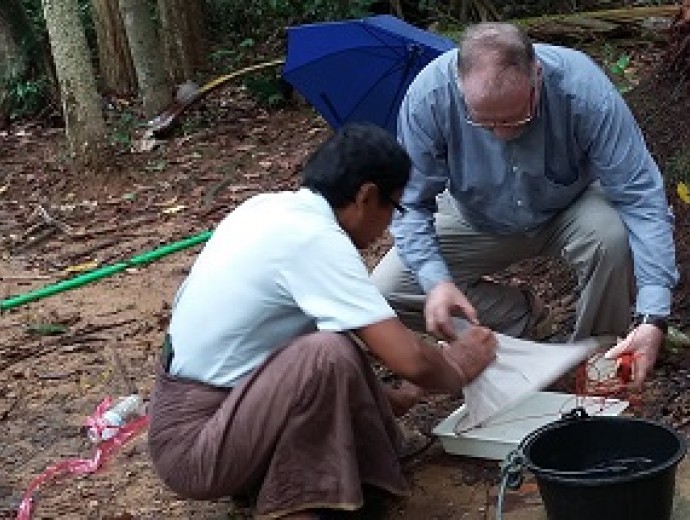