Employing the arts in the fight against malaria

Augusto Boal, a Brazilian theatre director, writer, politician and founder of the Theatre of the Oppressed – a theatrical form originally used in radical popular education movements – once described theatre as 'the capacity possessed by humans to observe themselves in action'. If one subscribes to this description of theatre and applies it to the art of dramatic performance, it is clear that drama can be a powerful tool with which to convey various messages to an audience in an interesting and entertaining way.

Malaria is a deadly infectious disease with a complex life cycle and, although many countries have effectively eliminated it within their borders, it remains endemic in 97 countries across the globe, where it affects mainly women and children from poor communities. In South Africa, the disease is endemic in three provinces, namely Limpopo, Mpumalanga and KwaZulu-Natal. Of these, Limpopo has the highest number of reported cases of malaria and the highest mortality rate, mostly in rural areas. According to Dr Taneshka Kruger, from the Medical Research Council and University of Pretoria Centre for Sustainable Malaria Control* (MRC & UP CSMC), a multi-focal approach is needed to fight malaria effectively. 'We cannot simply implement either vector control or parasite control; there must be a wider focus in order for the country to move from the control stage to the elimination stage in our fight against malaria', she says. Along with the rest of the staff at the Centre, Dr Kruger feels strongly that educating people about malaria is key to deriving maximum benefit from current control and prevention strategies.

Realising the potential of using drama to convey this message, Prof Tiaan de Jager, Director of the MRC & UP CSMC, approached the Department of Drama at the University of Pretoria (UP) and invited them to become involved in malaria education and health promotion activities. The Theatre for Development course, which forms part of the second and third year BA (Drama) curriculum at UP, lent itself perfectly to this collaboration.

The aim of the Theatre for Development course is for the audience to see the issue at hand portrayed on stage, to identify with what is being emphasised, to identify the problem areas and to realise the potential for change and development, both in themselves and in their communities. Typically, a Theatre for Development performance is created for a specific community and addresses the prominent concerns in that community, such as social, political, economic or, as in this case, health issues.

The play that resulted from this collaboration was developed and produced by four third-year drama students and performed by four second-year students and one first-year student. It is aimed specifically at learners in rural primary schools. The story is loosely based on Sibo fights malaria, an educational children's story book on malaria written by Ginny Stone in collaboration with the MRC & UP CSMC. The play tells the story of a little girl, Sibo, and her family, who live in an area of South Africa where malaria is endemic. It shows how the family take the necessary precautions to prevent them from contracting malaria, but Sibo has other plans, as she does not like wearing her long-sleeved clothing. She is bitten by a mosquito and soon after starts developing malaria symptoms. The audience is then taught all about malaria – the severity of the symptoms, what causes the disease and how to prevent it – through engagement with the characters on stage.

The UP drama group recently had the opportunity to perform their play at two rural primary schools in HaMakuya, a village in the Vhembe District of Limpopo. After the performance, questions were put to learners about the subject matter and their answers indicated that they had grasped the core message. The students also taught some songs that were performed during the play to the grade seven learners at one of the schools, so that they could in turn teach the songs to younger children and in so doing further spread awareness of malaria at the school, as well as at the children's homes. The drama group also had the opportunity to perform for the VhaVenda staff at the field office of the VHEMBE project (an MRC & UP CSMC satellite office and laboratory at Tshilidzini hospital). In turn, the staff performed their own malaria awareness show and sang a malaria awareness song that they had written themselves. The feedback on the Department of Drama's performance was very positive and, according to the VHEMBE field coordinator, 'perfect for young children in the community'.

Prof De Jager says that involving communities affected by malaria in the fight against the disease is central to the Centre's strategy. In this case, it means communicating with community members or spreading awareness through health promotion and education activities, which will enable the community to make informed decisions about their lives and potentially change their lifestyles. The initiative is a perfect example of the MRC & UP CSMC's trans-disciplinary approach to the sustainable control and eventual elimination of malaria. Initiatives such as this, along with safe and alternative malaria control methods, are set to 'end malaria for good', both in South Africa and the rest of the world.

* The Medical Research Council and University of Pretoria Centre for Sustainable Malaria Control is a fully integrated, multi- and trans-disciplinary, interfaculty initiative. The aim of the Centre is to coordinate and promote collaborative research on safer and sustainable malaria control and management, and to generate new knowledge and support new activities pertaining to safe malaria control in Africa. Researchers at the Centre believe that trans- and multi-disciplinary research is key to driving the malaria elimination agenda.

For more information on the MRC & UP CSMC please visit: www.malaria.up.ac.za 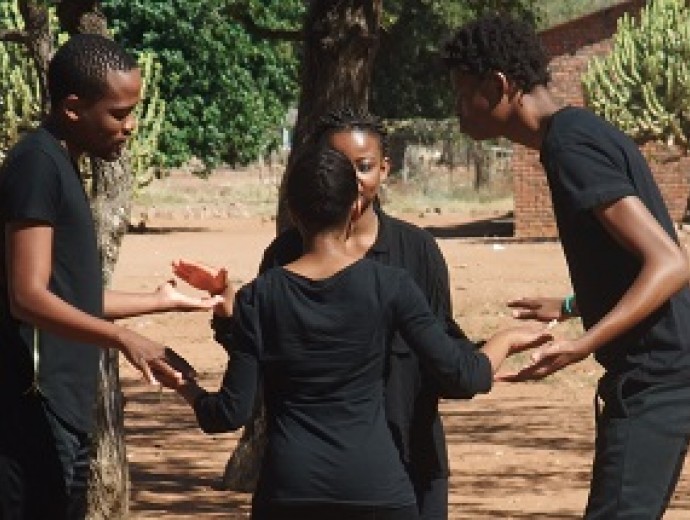 The group of drama students from UP in action