Merck Serono, UP CSMC and stakeholders discuss opportunities for collaboration

On Wednesday, 18 November 2015,  members of the South African Medical Research Council (MRC) and the University of Pretoria Centre for Sustainable Malaria Control (UP CSMC) met with representatives from Merck Serono and other stakeholders, including representatives from the Council for Scientific and Industrial Research (CSIR), the University of the Witwatersrand (Wits) and the National Department of Health (NDH), to discuss opportunities for collaboration with regard to malaria control and elimination in South Africa.

Merck Serono is the biopharmaceutical business of Merck, the world's oldest pharmaceutical and chemical company (founded in 1668). The company has delivered healthcare services in Africa since 1897. Merck is headquartered in Darmstadt, Germany, and its founding family remains the majority owner of the publicly listed corporate group. Merck Serono has a dedicated Global Health Research and Development group working to address key medical needs related to diseases such as malaria and schistosomiasis (also known as bilharzia, snail fever, or Katayama fever), with a focus on the needs of children in developing countries.

Prof Tiaan de Jager, Deputy Dean for Research in the Faculty of Health Sciences at the University of Pretoria (UP) and Director of the UP CSMC, opened the proceedings and said that in addition to its objective of becoming a leading research-intensive university in Africa, UP also aims to strengthen its impact in terms of economic and social development in the country, and that it is in this area that collaboration with industry and other partners is really important. He said that it is vitally important that all stakeholders join hands and work together towards eliminating malaria on the African continent, especially given the UP CSMC’s status as an MRC Collaborative Centre for Malaria Research.

Dr Beatrice Greco, Head of Malaria and Diagnostics at Merck HealthCare Research and Development, introduced the company to the group and discussed some of the malaria-related projects that Merck is currently involved with in South Africa. She explained that the company’s approach is based on public–private partnerships and collaborations with leading global health institutions and organisations in both developed and developing countries. To this end, Merck is already collaborating with the University of Cape Town (UCT) to co-develop a new research and development platform aimed at identifying new lead programmes to develop potential treatments for malaria, with the potential to expand the platform to encompass other tropical diseases. The company hopes to establish similar collaborative projects with the UP CSMC.

The rest of the morning was marked by lively discussions during which many opportunities for possible collaboration were identified. Areas mentioned included UP CSMC projects focussed on vector control that could benefit from collaboration with Merck’s research groups involved with their biological insect repellent IR3535, pooling resources in terms of drug discovery; and UP CSMC projects related to malaria diagnostics that could fit in well with Merck Serono’s current innovative projects in this field. Following the discussions, the representatives were afforded the opportunity to visit the UP CSMC’s research laboratories and insectary.

Deliberations are on-going, but the enthusiastic participation of all who attended the meeting made it abundantly clear that working together towards the common goal of eliminating malaria on the continent will be of benefit not only to the institutions, companies and other stakeholders involved, but also, ultimately, to the people of Africa who bear the burden of this devastating disease. 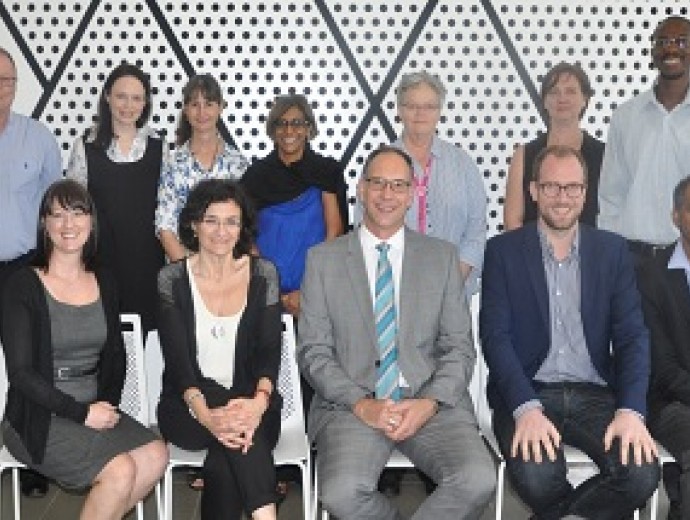 Representatives from the UP CSMC, Merck Serono and various other stakeholders who attended the meeting at UP's Faculty of Health Sciences