The PHILA Award takes its name from the Zulu word for ‘lead’. PHASA specifies a number of criteria for awarding the PHILA Lifetime Achievement Award including ‘a lifetime of commitment to public health, an exceptional contribution to public health research, education or service, demonstrable accomplishments as a public health practitioner and a track record of building public health capacity of younger individuals.’ The recipient must also have a history of outstanding leadership and professionalism. The PHILA award testifies to PHASA’s recognition of an individual’s role in influencing health policy and services, and fundamentally advancing public health in South Africa.

Profs Matjila and Buch join a select group of three previous recipients of the prestigious award, which is considered one of the highest honours in the discipline of public health in South Africa. The School of Health Systems and Public Health says the awards reflect its contribution to the University’s vision ‘to be a leading research‐intensive university in Africa, recognised internationally for its quality, relevance and impact, as also for developing people, creating knowledge and making a difference locally and globally’.

Dr Saiendhra Moodley, a senior lecturer at UP, gave the citation for Prof Matjila on behalf of PHASA. The citation portrayed a true gentleman who rose from the dusty streets of Hammanskraal to become a leader in public health in South Africa. It reflected on the many national and community health initiatives to which he contributed in the course of a career that spanned more than thirty years. His role in the training of public health medicine specialists was highlighted.

Prof Laetitia Rispel, Chair of the School of Public Health at Wits and a former president of PHASA, gave the citation for Prof Buch. She reflected on his passion, his commitment and his role as a public health activist. Prof Rispel spoke about Prof Buch’s contribution to anti-apartheid health organisations, his role in government in the 1990s and the work he has done since joining UP in 2000, including his term as Dean of the Faculty of Health Sciences.

Both citations included anecdotes that reflected on the character of the recipients, suggesting that the awards celebrated not merely the achievements reflected in their CVs but also the way in which they practised their discipline and their role as leaders. 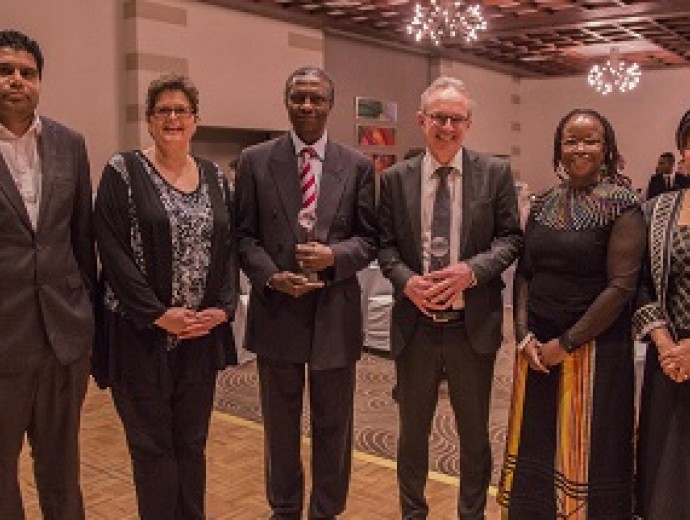