Malaria is endemic in three provinces in South Africa, namely Limpopo, Mpumalanga and KwaZulu-Natal. As the disease is very sensitive to climatic variability, and mosquitoes thrive in a warm, moist environment, it is feared that global warming may enable malaria parasites to spread over more provinces in South Africa and in the process expose more people to the disease.
To address this issue, the University of Pretoria’s Centre for Sustainable Malaria Control (UP CSMC) and the French Embassy in Pretoria co-hosted a workshop at the University on 29 and 30 June 2015 to explore the potential of a joint research programme using remote sensing – in other words, scanning of the earth by satellite or spacecraft in order to obtain information about it – in an effort to contribute towards the elimination of malaria. The proposed collaborative project is currently known as the ‘Remote sensing for malaria control in Africa’ programme, or ReSMaCA.
Prof Cheryl de la Rey, Vice-Chancellor and Principal of the University of Pretoria (UP) and HE Elisabeth Barbier, French Ambassador to South Africa and Lesotho, welcomed delegates to the workshop and expressed their excitement about and hopes for the proposed collaboration. Ambassador Jean-Marc Châtaignier, Managing Director of the French Institute of Research for Development (IRD), in his keynote address, expressed the importance of collaboration among institutions worldwide in creating and sharing knowledge to address the problems of our time.
The idea for the joint research programme came about when the Science Project Manager to the French Embassy in Pretoria met with Prof Tiaan de Jager (Director of the UP CSMC), Dr Taneshka Kruger (Senior Malaria Coordinator), and colleagues from the faculties of Health Sciences and Natural and Agricultural Sciences after the launch of the South African Research Chairs Initiative (SARChI) Chair in Sustainable Malaria in April 2014. Discussions between the two parties were soon expanded to include the French national space agency, Centre National d'Études Spatiales (CNES), and more researchers from the UP CSMC.
The workshop was attended by scientists from various French research institutions such as CNES, the IRD’s UMR Espace pour le Développement (ESPACE-DEV), the Laboratoire d’Aérologie of the Midi-Pyrénées Observatoire, as well South African partners such as the South African National Space Agency (SANSA) and the Medical Research Council (MRC). The Manager of the Limpopo Province Malaria Control Programme and delegates from the National Department of Health and the World Health Organisation (WHO) also contributed to the discussions. Other delegates included representatives from the universities of Zimbabwe, Mozambique and Reunion, as well as the Pasteur Institute of Madagascar. The objectives of the workshop were to draw the key players of the planned project together in order to identify suitable partners for collaboration, to define the boundaries of the research programme and to explore funding opportunities.
The workshop was part of a series of events currently taking place around the globe, which, in combination, form the 21st Annual Conference of the Parties (COP21, also known as the 2015 Paris Climate Conference). These events will culminate in the Sustainable Innovation Forum (SIF15), the largest business-focused event of COP. In 2015, COP21 will, for the first time in more than 20 years of UN negotiations, aim to achieve a legally binding and universal agreement on climate with the aim of keeping global warming below 2 °C. France will play a leading international role in hosting this seminal conference. The conference, which will take place on 7 and 8 December 2015 in Paris, is expected to draw close to 50 000 participants including 25 000 official delegates from governments, intergovernmental organisations, UN agencies, NGOs and civil society.
During the workshop held at UP last week it was suggested that the various partner organisations involved in the proposed ReSMaCA programme should take part in the exhibition on climate-related projects that usually accompanies this prestigious event, in order to showcase the programme, give it additional exposure and identify potential collaborators.
- Author Ansa Heyl
Share this page
Published by Taneshka Kruger 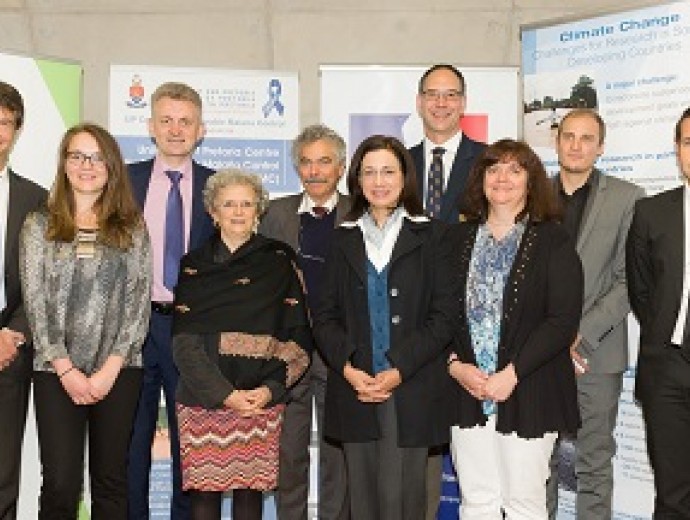