Sibo and the UP CSMC fight malaria at Mjejane Primary School

Every year on 25 April, activities are organised all over the world to mark World Malaria Day and raise awareness of this devastating disease. Approximately half of the world's population is at risk of contracting malaria, but 90% of malaria cases and deaths occur in sub-Saharan Africa. Sadly most of these deaths (around 78%) occur among children under the age of five years. In Africa, a child dies from this dreaded disease every 60 seconds.

With these facts in mind the University of Pretoria Centre for Sustainable Malaria Control (UP CSMC) interpreted this year’s World Malaria Day theme – Invest in the future, defeat malaria – from the point of view that children are the future. One of the Centre’s key focus areas in the attempt to help eliminate the disease is educating people, especially those who live in malaria-endemic areas. The idea is that through investing in the education of young children and making them aware of malaria and how the disease is transmitted, the information will reach their parents and potentially trigger lifestyle changes that could lessen the burden of the disease on communities.

To give voice to this interpretation of the theme, 16 UP CSMC postgraduate students and two students from Maastricht University in the Netherlands doing a ten-week internship under supervision of the Centre’s Prof Lyn-Marie Birkholtz, took part in health promotion and education activities at Mjejane Primary School in Nkozi West district in Tonga, Mpumalanga on Friday, 24 April. The students were warmly welcomed by staff and learners at the school after which they were assigned to the school’s 13 classrooms to begin the morning’s activities.

The students started their interaction with the learners by reading to them from Sibo fights malaria, an educational children’s story book on malaria. The book was written by Ginny Stone and tells the story of a little girl called Sibo and her family who are going on holiday. In the story, she wonders why she has to take pills before they leave. She soon finds out that their destination is in a malaria hot-spot and that certain mosquitoes are to blame for spreading the disease. She then learns all about malaria – the severity of the symptoms, what causes the disease and how to prevent it. This informative book, which was launched during the Centre’s World Malaria Day in 2014, is an initiative of the Centre’s Health Aspects cluster and was designed to be used as a health promotion and malaria awareness tool. Health care practitioners from the area assisted the students working with learners in the lower grades to ensure that the message got across. The students also distributed crayons and pictures for the kids to colour in. They enjoyed this activity immensely and were all very proud of their colourful mosquitoes.

After the classroom activities it was the students’ turn to be entertained by the learners. The entertainment included items (drama, songs or speeches) on the topic of malaria, a performance by the school choir performed and a very powerful poem about malaria (read the poem below). The learners really impressed with their knowledge of malaria, which is a testament to the success of educational projects already underway in the area.

Concluding the morning’s activities on a high note, the UP CSMC donated 20 copies of Sibo fights malaria to the school library, which is desperately in need of storybooks. The Centre, together with Makro Mbombela, also donated stationery (rulers, pens, crayons and chalk) to the school.

A dreadful and wicked disease

Others call you a serial killer

Others say your shelter is all over the world

Boundaries do not limit you

You are a serious disease.

But your work is very dangerous

You left many children without parents

Orphans are all over the world.

You are not curable

Yes! You are a dreadful monster

A killer, a witch who does not carry medicine

You are transmitted from one person to another.

Nurses and clinics prevent you

But you are a killer. 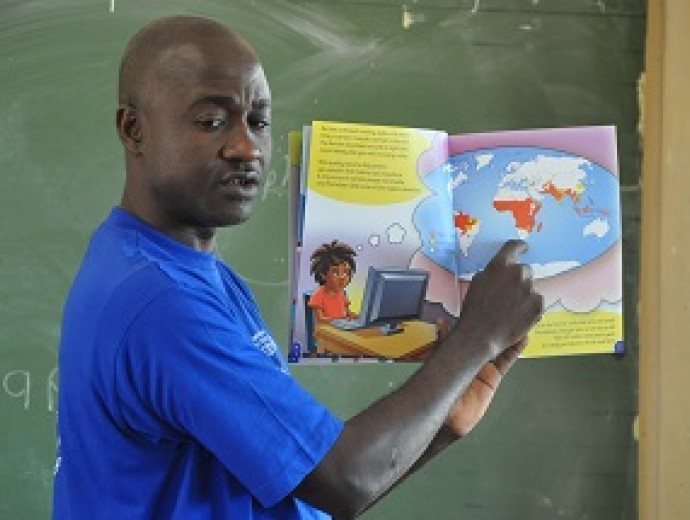