Prof Stella Anyangwe elected to Board of Directors of WADEM

Prof Stella Anyangwe, an Honorary Professor in Epidemiology at the School of Health Systems and Public Health at the University of Pretoria (UP), has been elected as Director for the Africa Region on the World Association for Disaster and Emergency Medicine (WADEM) Board. Prof Anyangwe’s two-year term in this position will commence immediately following the 19th World Congress on Disaster and Emergency Medicine that will be held in Cape Town from 21–24 April 2015.

According to Prof Anyangwe, public health in Africa is strongly negatively affected by all types of emergencies and disasters, including floods, droughts, petrochemical fires, conflicts and epidemics. African countries have made commitments to strengthen their capacities to deal with these emergencies and disasters. They are supported in these endeavours by the World Health Organisation (WHO)’s Regional Offices for Africa and the Eastern Mediterranean, as well as other partners such as academic institutions. The University of Pretoria is one of the participating academic institutions that agreed to train health workers in the basics of Disaster Risk Management (DRM). The first such course on DRM in the African Region was recently concluded under Prof Anyangwe’s supervision. She says that her contribution as WADEM Board Director for the African Region will be to showcase the progress countries in the region are making in building DRM capacities, implementing measures to reduce risks, and strengthen the preparedness, response and recovery of African countries with regards to disasters.

WADEM is a volunteer-run international organisation that works with partners to disseminate scientific evidence and best practice regarding pre-hospital and emergency health care, public health, and disaster health and preparedness. They are also involved in the provision of academic and evidence-based input for the development and review of relevant policies and educational programmes. As set out in their mission statement, the organization ultimately exists to foster international collaboration in the application of knowledge gained from data collected through research to develop strategies aimed at promoting all aspects of human health, to decrease susceptibility and increase resilience in view of future health disasters and emergencies.

The field of emergency medicine is rapidly developing in Africa and Prof Anyangwe is exceptionally well qualified to contribute to WADEM’s activities. She has been actively involved in Africa’s public health sector and in disaster preparedness and response throughout her career. Prof Anyangwe joined the WHO in 1996, and served as a Country Representative for the organisation in various countries, including the Seychelles, Mali, Zambia and South Africa between 1998 and 2011. Her last assignment for the WHO was in Brazzaville, Congo, as Programme Area Coordinator for Disaster Preparedness and Response in the African Region. She retired from the WHO in April 2013 and returned to South Africa where she and her husband are permanent residents.

Since joining the University of Pretoria’s School of Health Systems and Public Health in November of last year, Prof Anyangwe’s focus has been on Disaster Risk Management and how it relates to public health. She also provides training in this field to government departments and NGOs. In addition to her involvement in the aforementioned field, Prof Anyangwe also has an avid interest in neglected tropical diseases and primary health care, and has conducted extensive research on the socio-economic factors associated with tropical diseases (especially urinary schistosomiasis) in women, as well as on harmful traditional practices that affect women’s health in some African countries.

The University of Pretoria takes pride in the fact that its Faculty of Health Sciences plays a leading role in various health professions, not only in South Africa but also on the international stage. This is exemplified by the Faculty’s many staff members who, like Prof Anyangwe, serve on ministerial committees and local and international professional and statutory bodies. 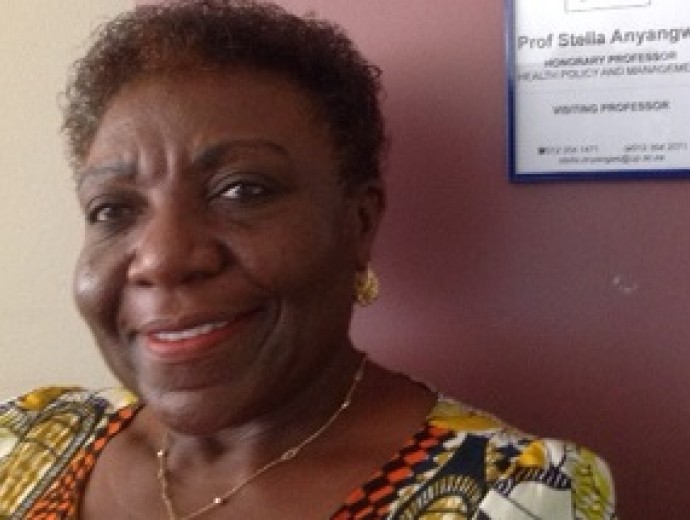