Namibia’s urban poor are stuck in limbo, without land or services

Informal settlements are increasingly emerging in cities in developing countries across the world, including Africa.

Today an estimated 25% of the world’s urban population live in informal settlements. These settlements have limited or no access to basic services like water and sanitation; lack proper infrastructure like roads and formal housing structures.

Namibia’s capital city, Windhoek, is no exception when it comes to unplanned urbanisation. I conducted a study into informal settlements in the capital. The main aim was to establish the relationship that people had with the land, as well as their access to basic services.

I found that almost 85% of the informal settlers in Windhoek do not own the land they occupy. I also found that most had limited access to public municipal services. These two issues are closely interlinked. Our study shows that formalised land tenure is a condition for households to access municipal services privately.

The people I interviewed said their need to own land was more pressing than their need to access services. This makes sense given that formal land tenure is a requirement for communities to access public municipal services.

We conclude from our findings that there is an urgent need to formalise land policy in Windhoek’s informal settlements. But that if the Namibian government wants to improve the living conditions of the urban poor, it needs to introduce policies that recognise the complex nature and relations of informal settlements.

In colonial times, settlers across Africa restricted the number of indigenous Africans who were permitted in urban areas. Land was taken from the original occupants and vested in an elite few.

Namibia’s colonial regimes (Germany in the early 1880s and South Africa in the mid-60s) followed similar policies, particularly in Windhoek. With independence in 1990, there was an influx of migrants from rural to urban areas. But successive post-colonial regimes have been unable to provide adequate infrastructure for the new urban dwellers – and haven’t been able to address the legacy of colonial land policies.

At present, services in Windhoek are provided by the city council. Namibia’s central government relies on the council for service provision. In turn, the council relies on community self-governing Water Point Committees to administer many aspects of service delivery in Windhoek’s informal settlements. This relationship is informal. It’s not legally binding and operates outside of a proper framework or policy.

The council, meanwhile, blames the central government for not creating a proper environment for quality service delivery in the capital. The present fuzzy land policy is advantageous to council, reducing the incentive for reform.

It is not clear, whether the lack of a coordinated approach by the central government is due to its inability to perform its function, or lack of political will and policy. Part of its frustration relates to a long-standing absence of legislation.

Nevertheless, the Urban and Regional Planning Act of 2018 should enable the city council to accelerate the upgrading of informal settlements and to address the issue of land tenure to these communities.

The absence of legislation for almost 20 years left informal settlers in a legal limbo, without clear title to their land. During that time they were only provisionally tolerated by the government through the provision of communal services like water and sanitation.

But things don’t have to remain this way. The Namibian government could do a number of things differently to improve the conditions for its urban poor.

The government must form strategic partnerships with private sector actors to provide services for informal urban settlers. But policies must be introduced that recognise the complex nature of informal settlements. These policies need to provide pathways for urban dwellers to own the land they occupy and drive the Sustainable Development Goals 2030 agenda of “leaving no one behind”.

Access to basic services is part of the goals. At the rate Windhoek is going, it seems unlikely this goal will be met by the 2030 deadline. But some things could be done differently to change this and put Namibia’s urban poor on a more prosperous, secure and dignified path.

And, while I focused on Namibia, the lessons are applicable to other developing countries that face similar urban challenges.

Selma T Karuaihe is a Senior Lecturer in Environmental and Resource Economics in the Department of Agricultural Economics, Extension and Rural Development at UP.

This article first appeared in The Conversation on 19 September 2019. 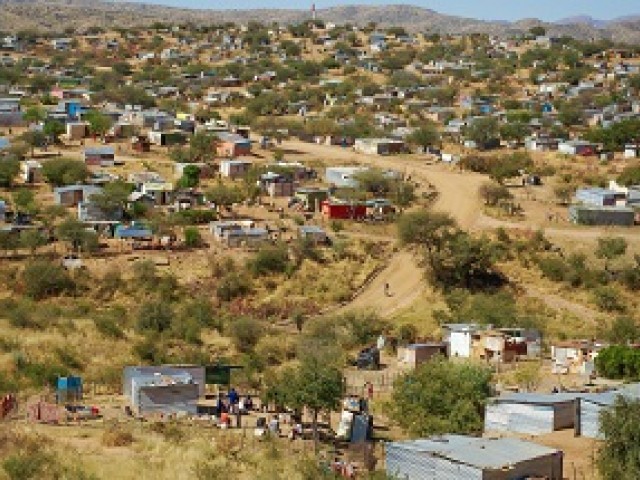