Two professors in the Department of Information Science published books in Elements in Book and Publishing Culture series.

Two professors in the Department of Information Science, Archie Dick and Elizabeth le Roux, published books in Cambridge University Press’s Elements in Book and Publishing Culture series towards the end of 2020. The series presents new research on print and reading cultures in Africa, from the mid- 19th century to the present day.

In his book, Reading Spaces in South Africa, 1850-1920s, Archie Dick analyses reading culture in South Africa, from the colonial to Union government. He points out that very little is known about the contributions made by voluntary societies, active during the second half of the 19th and early 20th centuries in small towns and rural settlements, to South Africa’s cultural and literary development. This book fills the gap by examining the records of English, Dutch-Afrikaans, and African-language mutual improvement, debating, literary, book, and reading societies, as well as of subscription libraries. In their voluntary societies’ reading spaces these language communities promoted cultural and literary development in a unique ethos of improvement and raised political awareness in South Africa’s colonial transition to a Union government and to racial segregation.

A special feature of this book is an account of the interactions and relationships between these voluntary societies, as well as their wider educational influence on the towns and settlements in which they were active. One finding reveals, for example, that Dutch-Afrikaans and African language communities reframed rather than rejected the English rhetoric and ethos of improvement. In this way, these communities stressed ideas about education, rights, and equality.

Elizabeth le Roux’s book, Publishing against Apartheid South Africa: A case study of Ravan Press, examines a South African publishing house during the apartheid and post-apartheid periods. She notes that research on anti-apartheid resistance has mostly highlighted political and to some extent cultural engagement, with little attention being paid to print culture. Despite the cultural, political and social importance of anti-apartheid publishers, they have not yet been studied. This book aims to fill that gap by examining the history of the most radical of these publishers, Ravan Press, from its origins in 1972 to its takeover in 1998. At Ravan, publishing was a tool to fight against apartheid; in fact, publishing was a form of resistance in its own right. This was not a company founded to make a profit, but rather an activist organisation aiming to create awareness and shift people’s beliefs.

Prof. Le Roux’s research builds on studies of censorship in the apartheid era, which largely focus on writers rather than publishers, and on the theoretical concept of édition engagée, or committed publishing, developed in France. It thus provides new insights into the role of a publisher in social change: a balancing act between commercial viability and radical publishing; and between white ownership and black expression. Ravan was ultimately unable to survive South Africa’s transition period, amid changing political, social and economic conditions, in part because of a lack of support from the new government. In the book, she argues that this has inhibited the emergence of a free, diverse publishing industry in the post-apartheid era.

The books were launched by Cambridge University Press in December 2020, along with two other titles in the series of Elements in Publishing and Book Culture: African Literature and the CIA: Networks of Authorship and Publishing, by Caroline Davis of Oxford Brookes University, and Underdevelopment and African Literature: Emerging Forms of Reading, by Sarah Brouillette of Carleton University. 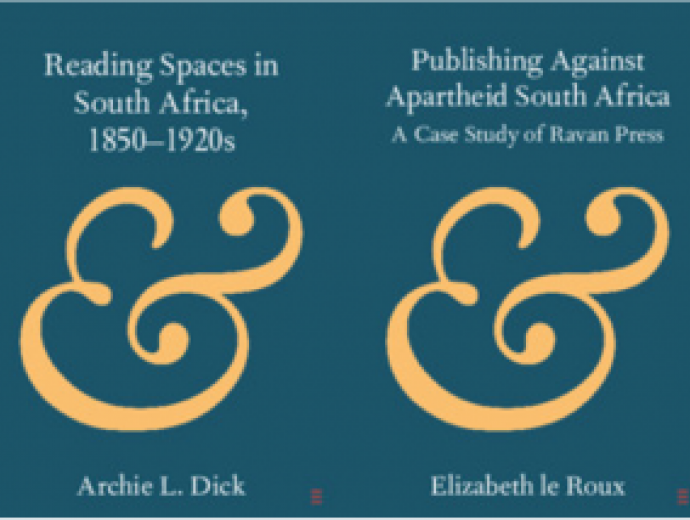