“We have triumphed in the effort to implant hope in the breasts of millions of our people.  We enter into a covenant that we shall build the society in which all South Africans, both Black and White, will be able to walk tall, without any fear in the inalienable right to human dignity; a rainbow nation at peace with itself and the world”.  Nelson Mandela

These words were spoken by one of Africa’s greatest leaders at the dawn of a new democracy in South Africa.  The stage has been set, but what does the future hold for the youth?

We live in a world that is rapidly growing smaller.  Once upon a time we lived in tribal villages and the world was as big as the nearest tribe or the occasional nomad passing by, the idea of me standing here in Holland from South Africa was almost unthinkable.  Once upon a time we believed that the world stood on four pillars and was flat.  At the moment we believe that the world is round and so small that we can fit the entire global news onto our television screens.  Gone are the days of living in our protected, familiar environments, surrounded by our own kind.  We are increasingly shocked into new and different ways of thinking, facing other cultures and different ways of doing both locally and globally.

As young leaders who are growing up in this changing environment, we have to learn to broaden our horizons, challenge our thinking and explore new ways of seeing the world.

I am an African.  I was born in Africa, I live in Africa and I grew up in Africa.  Since I can remember, it has been absolutely normal for me to see myself as an African, or more specifically a South African.  The first time I left my country as an exchange student, I was completely unprepared for the stereotypes that I would be confronted with about my continent.  “Why aren’t you black?”  “Do you have lions running around in your garden?”  “Do you know how to work a computer?”….  And on my side, the first shock I had was that all these people look the same and are of the same race!!!  I live in a country that is rich in diversity, with a population consisting of people from all across the world, South Africa is truly a rainbow nation.

My first experience of Culture shock made me realise the importance of two key concepts that any leader should be familiar with:  Ubuntu and Cultural Intelligence.According to Mbigi (2006) Cultural philosophy is vital in leadership as it enables us to understand philosophy and contextual realities.  Our worldviews influence our leadership styles.The European philosophy of leadership is based on the statement by Descartes:  Cogito, ergo sum – “I think because I exist”.The East Asian cultural worldview underlying leadership is characterized by Kaizan – the emphasis on continuous improvement to attain perfection.The Western cultural worldview as championed by the dominant and relatively young American civilisation can be stated as “I am because I, the individual hero, dream and do.”The African worldview is characterised by deliberate emphasis on people and their dignity – Ubuntu – “I am because we are; I can only be a person through others”.

Archbishop Desmond Tutu describes the concept more clearly:
“It is about the essence of being human, it is part of the gift that Africa is going to give to the world.  It embraces hospitality, caring about others, being wiling to go that extra mile for the sake of another.  We believe that a person is a person through other persons; that my humanity is caught up and bound up in yours.  When I dehumanize you, I inexorably dehumanize myself.  The solidarity human being is a contradiction in terms, and therefore you seek to work for the common good because your humanity comes into its own in community, in belonging.”

The ability to honour the concept of Ubuntu as a servant leader is the key to the success of future leaders in Africa.  As we are influenced by cultures from across the globe, young people in Africa are increasingly becoming more Westernized in their thinking and living, oftentimes living contradictory lives when they are at university or school and when they get home to their more traditional roots.  The challenge for young people in Africa is to retain their roots and to find a uniquely African leadership style that is focused on healing the broken spirits of their followers, cherishing a warrior tradition that emphasises self-discipline and having a high degree of personal consciousness that allows one to transcend self-interest in order to focus on the common good of society.

Being able to lead through the principles of ubuntu is however not enough for taking young leaders into the future.  The diversity of Africa requires a leader who is able to quickly adjust to multiple cultures and work well in multinational teams.  This ability is known as Cultural Intelligence.

Culturally Intelligent leaders are able to easily adjust to different cultures.  They are secure enough in their own cultures, that they are able to freely explore different and often opposing views of other cultures by responding appropriately without fearing loss of their own cultures.  Cultural Intelligence allows a person to pick up the finer nuances of another culture with relative ease, and to interpret them in the correct context.  It allows a person to think strategically about their interactions with other cultures by planning what they are about to say.  Furthermore, it allows a person to mimic the behaviours, gestures and language of people from another culture with enough self-confidence to continue in spite of possible failures.

In order to illustrate the importance of gaining Cultural Intelligence, a few examples:

1. A good friend of mine got married about 2 years ago to a young man from a different ethnic background to herself.  In African culture, it is very important for the man to pay a lobola (dowry) to the parents of the girl he is to marry in order to  ensure the well-being of the parents when their daughter can no longer take care of them.  The uncles of the couple have to negotiate the price of the dowry.  In the culture of the man, it is custom for the uncles to go to the house of the girl, and then wait outside until they are invited into the house by the uncles of the girl.  In her culture, the custom is that the man’s uncles invite themselves into the house.  This already set the stage for confusion as neither of the parties were aware of this difference!  After the uncles of the man was waiting outside the house of the girl for about 2 hours, the uncles of the girl realized what was happening and invited them in.  As if this was not enough, there is also a difference in the way that the two groups negotiate the dowry.  In the girl’s culture, the uncles make the highest price they can, and then expect the other party to fight for a lower price.  In the man’s culture, it is seen as an insult to negotiate for a lower price, and the uncles accept the first offer that is made to them.  The couple paid their own dowry, and when they found out that they had to pay a dowry of R 600 000 they were quite upset.  In the end the girl had to convince her uncles to lower the price.  If these parties acted with Cultural Intelligence, this matter could have been averted.

2. Another friend almost lost his job due to cultural differences.  In his culture, it is seen as necessary question one’s superiors and to ask for clarity and information from one’s supervisor.  In the culture of the supervisor, it is unacceptable for an employee to ask questions, as it is experienced as a challenge to the supervisor’s authority.  Much conflict arose between these two parties, almost leading to the dismissal of the employee.  The matter ended in a disciplinary hearing with the head of the HR department before they realised the reason for their negative relationship.  After much arbitration they realized why they were fighting so much and today they have a much better relationship.  Once again, Culturally Intelligent behaviour would have lead to the resolution of this problem long before it arose.

These are but two minor examples of the powerful influence culture can have on the way we do things.  In a diverse cultural environment, we too often tend to think that we are all the same and minimize the impact of our differences, to the detriment of our society.

The future of the youth in Africa

What awaits the youth in Africa?  I am part of a generation that falls through the genres.  A generation that bears the scars of a painful past… living in an upside down reality.  I live in a country with the crime rate of a war-zone where every person I know can tell a story of a hideous encounter with crime.  A country that faces the world’s greatest HIV/AIDS epidemic, power shortages, skills shortages, poverty, a brain drain that sucks the country’s precious few bright one’s dry, a government that is rotten with scandal and corruption… The list of problems we face is endless.

BUT I also live in a land of tremendous opportunity.  I live in a land where young people are breaking down the barriers of race, gender and colour that once separated us.  I am part of a generation of young people that are establishing a uniquely South African identity, celebrating our colourful diversity.  I live in a land where parents are emigrating to give their children a better future…and those same children are returning home to the land of their birth because we are a generation  that wants to be part of the solution, NOT the problem.

But we are young.  We are bright-eyed and dreamy about the future.  We are not yet jaded by the limitations of reality.  We are the dreamers who uninhibitedly want to rush into the future to change the world before we become stifled by the greyness of adulthood.  But we are young.  We need guidance.  We need leaders who will empower us to lead.  Leaders who lead by example and who emphasises strong values of honesty, purity, ubuntu and respect.

Africa is not for the faint-hearted.  It is a land of endless opportunity for those with a warrior spirit who are willing to take initiative, fight for survival and endure its hardships.  Africa is for the dancers, the dreamers and the drivers who want to show the world what they are made of.

Is there a future for the young leaders of Africa?
Will our voices be heard?
Who will be the leaders that set the example for us?

Will they be men of stature that instil strong values in us, or will they be corrupted by power and fame?

I met Riana during my last visit to South Africa when I visited Pretoria. I was surprised about the fighting spirit of young 'white' South Africans who want to stay and be involved in the future of their rainbow nation South Africa inspite of the dark future expectations. I invited Riana to participate at my African Leadership Conventions to speak on behalf on the young generation of African Leaders who are knocking on the door in Africa . 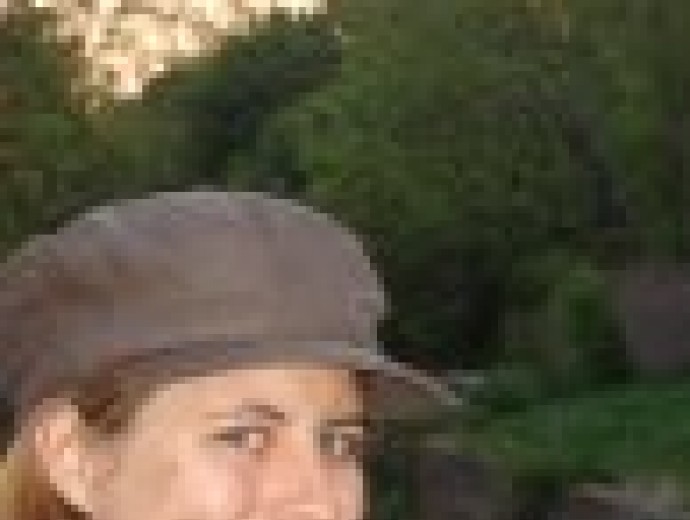