Cognitive Geomatics project kicks off between UP and two international universities

'Cognitive Geomatics – Digital teaching to create awareness of intercultural differences in sense of place using Germany, South Africa and Kenya as case studies' is a project of the Baden-Württemberg-STIPENDIUM for students - BWS plus, a programme of the Baden-Württemberg Stiftung. The project runs from March 2022 until February 2025 and is financed with an amount of €140,000.

A previous project, ‘Geomatics and Participation’, successfully established a long-term cooperation between the Karlsruhe University of Applied Sciences (HKA) in Germany and the University of Pretoria (UP) in South Africa. With this new Cognitive Geomatics project, which kicked off in March this year, they are expanding the network to include the University of Nairobi (UoN) in Kenya. The project will widen the thematic discourse to be more interdisciplinary – apart from geo(infor)matics, students from the social sciences and cultural media management will also be involved.

According to Professor Serena Coetzee, Head of the UP Department of Geography, Geoinformatics and Meteorology and one of the three Principal Investigators in the project, “Rapid advances in information and communication technologies, together with the increasing availability of processing options in the cloud, are leading to significant increases in data. Future use and analysis of the location-based aspect of such big data is expected to lead to a boom in geomatics, implying that increasingly not only geomatics specialists will work with such data.

"At the same time, it is becoming increasingly evident that the mere positioning of objects based on geographic coordinates does not do justice to the subjective experiences of space and the world around us. Sense of place, however, differs from one culture to another and is closely linked to locality and authenticity. This raises questions about the nature of the interplay between the way we think about and perceive physical space (our mental maps) and the use of high-tech methods for measuring, analysing and visualising our environment (in the virtual world), which can be described as cognitive geomatics. The individual cultural differences are also of interest in teaching and learning.”

The project officially started with a workshop on ‘Sense of Place - Web Mapping’ on 7 and 8 April at the HKA, bringing together six lecturers from the three cooperating universities and 13 HKA students. In winter semester 2021/22, HKA students designed and developed digital teaching materials as part of their course work, using web mapping technologies, and aimed at teaching different aspects of spatial awareness.

During the workshop, they presented their material, which was critically reviewed by the project partners from Africa and a larger group of students, not only from geomatics. Workshop participants originated from eight different countries. The meaning of ‘sense of place’ was traced, and web mapping possibilities for interactive, dynamic spatial visualisation of statistical data or for sharing one's ideas were shown. The two days were a successful start to the new project, as student participants had the opportunity to experience cooperation and exchange with South Africa and Kenya. In contrast, the project partners were inspired for further project work, which will primarily take place virtually.

Mental mapping as an introduction to ‘sense of place’, the theme of the workshop 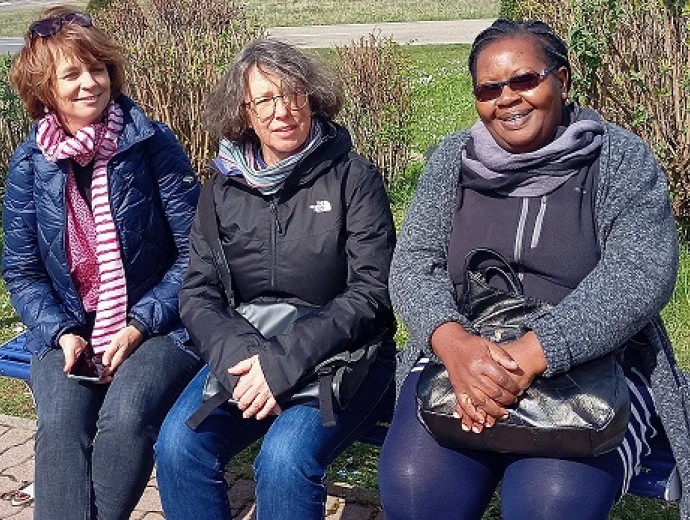