On the 27th of October 2021, Dr JJ Gregory and Prof Nico Kotze led a group of honours students on a field trip to the inner-city of Johannesburg and Soweto. The first part of this tour focused on urban regeneration in the inner-city of Johannesburg. We visited the Maboneng precinct and Jewel City (a mixed-use development focused on affordable housing and retail space). The developers of the Maboneng precinct have used cultural and creative industries as a lever for urban regeneration. One of the developers of Jewel City shared some of their exciting plans for future regeneration initiatives in the city. The students were encouraged to critically reflect on the impact of urban regeneration within the post-apartheid city.

The second part of this tour focused on urban change in the township. On our way to Soweto, we briefly stopped at Sophiatown. This neighbourhood was infamously destroyed in the 1950s when the Group Areas Act was introduced and saw thousands of residents forcibly removed to Soweto. Mrs Liz Block, a lecturer from the University of Johannesburg, facilitated the tour of Soweto. She has over 20 years of experience lecturing in Soweto at the old Vista University during the 1980s and 1990s. She has met Nelson Mandela and other prominent Sowetans. Her knowledge of the history of Soweto, its people and quirky tales fascinated the students. Our first stop was the Walter Sisulu Square in Kliptown, the site where the Freedom Charter was conceptualised in 1955. From there, we proceeded to the famous Vilakazi Street in Orlando West. This popular street housed both Nelson Mandela and Arch Bishop Desmond Tutu at some stage. The only street to have produced two Nobel Prize winners. It is also close to the site where Hector Pieterson was fatally shot during the 1976 Soweto uprisings. We took a walk to the Hector Pieterson Memorial. The Vilakazi Street precinct has been commodified for tourism consumption in recent decades. The students were intrigued with the level of development that has occurred across Soweto in general. 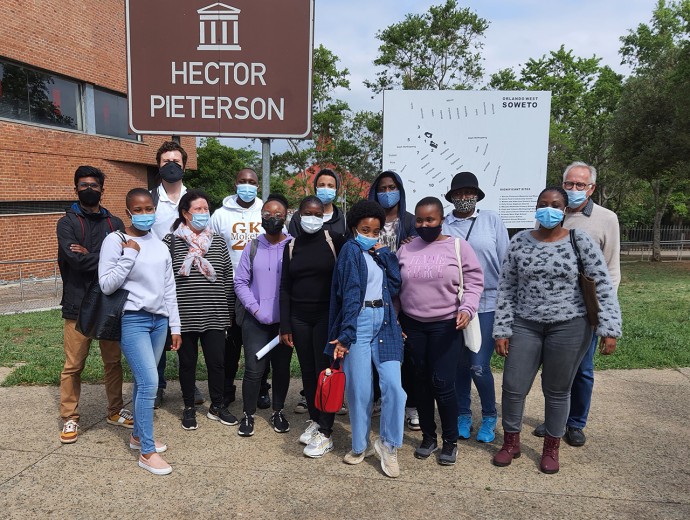