More than 99% of the Sahel’s groundwater resources remain untapped, ready to water lands perfect for crops and timber.

Prof Cheikh Mbow, land-use expert and director of Future Africa at the University of Pretoria, says rich natural resources in Sahel countries like Chad, Senegal and Niger could transform life for the people who live there. Especially women and youth.

“The Sahel has, for over 40 years, been seen as just a place of hunger, persistent droughts and climate extremes; a place where farmers struggle to produce the crops and livestock to sustain the growing population,” says Mbow and co-authors in a recent publication.

“The foundation of a new rhetoric is to see the Sahel as having the human capital and the natural resources to generate quality products and create massive green jobs.”

This could mean, for example, using solar power to extract water from large transboundary groundwater reservoirs such as Lullemeden and Taoudeni. Incredibly, these water resources have the potential to fully meet the current and future needs of West Africa.

“Groundwater resources exist both as the superficial water tables recharged during the rainy season, and the fossil water reserves, including the deep-water tables of sedimentary basins. Considerable reserves of fresh water are stored in these deep-water tables, on a scale of thousands of billions of cubic meters,” says Mbow.

He says there is also huge potential to develop farms, forests and pastoral resources by using better technology, public-private partnerships and cross-border cooperation.

Mbow says this could be the Sahel's “New Deal”, in reference to United States President Franklin D. Roosevelt’s infamous public works and financial reforms of the 1930s.

But, he cautions, this so-called “New Deal” will depend on the participation of youth and women entrepreneurs, and on improving infrastructure and better managing threats like land grabs. And, of course, rethinking funding in terms of investments and capital flow.

Mbow says that if its natural resource management is transformed, he is confident that the Sahel can change its image and write a new, prosperous story. 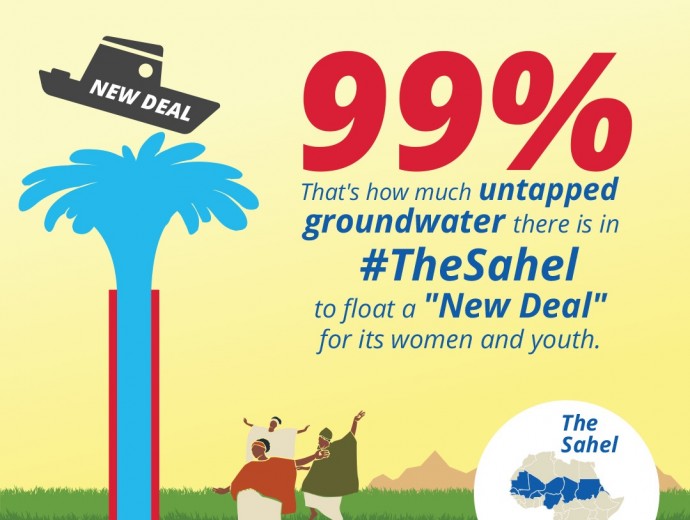