YouthMappers from Malawi and South Africa were fortunate enough to partake in the first International Joint Youth Mappers training in late October 2016, and what a success it was.

On the 31st of October, we made the short journey from the University of Pretoria (UP), South Africa, to a foreign land, just to discover that it was similar to home (South Africa) in many aspects. Both countries drive on the correct side of the road (left-hand side), same brands and shop outlets and a vibrant culture to name a few.

We were invited to join the YouthMappers from Chancellor College, the University of Malawi in Zomba, Malawi, for training in OpenStreetMap (OSM) mapping.

Upon arrival, we were taken directly to Chancellor College for an introduction and a briefing on what was planned for the week. This 10-minute introduction then turned into a half hour discussion on what UP has done in the last few months and how the YouthMappers of Malawi are facing similar challenges with local mapping.

The training conducted over the two days covered the two main methods on how to capture and improve spatial information in their community using OSM, both online and offline. We were familiar with the online OSM application and having worked on it a few times, we were able to assist with the training and provide thoughtful input from our experiences, like save your work regularly as you never know when the power will be cut off. Both Malawi and South Africa experience unexpected power cuts from time to time.

The second day of training was more focused on offline applications as Malawi struggles with reliable internet connections. Here Dr. Brent McCusker demonstrated the JavaOSM (JOSM) application for offline mapping and further explained how the information that YouthMappers are mapping will be used for decision making. This was very insightful as we have not yet explored using JOSM method of mapping at UP. This method would also enable users to map at home if they rely on university internet.

One of the bigger projects that the YouthMappers from UP has been involved with was mapping informal settlements in Pretoria east, called Alaska. A discussion on the access to resources such as GPS was brought up. Sean explained that there is not always a need for big and expensive equipment to capture data! He then further gave a brief demonstration on some of these free data capturing applications available to use on smartphones. EpiCollect+ was demonstrated and real world examples were shown to the students on its capabilities.

Throughout the training, we were able to further discuss what both chapters are involved in and what our plans and aspirations are for 2017. The main objective for both chapters is to make more of a contribution to the global community through mapping using OSM. This is an international effort that we are all able to contribute to as the YouthMappers have allowed us the OSM platform to make a difference.

However, not everything was all about hard work. We were also fortunate enough to see a little bit of Malawi, and the local attractions. We spent our first morning exploring the Zomba Mountain plateau while taking in all the magnificent views of Zomba. As map enthusiasts, we decided to take this journey unguided using Maps.Me (OSM maps) that had dual tracks mapped on it to get around on the mountain, but unfortunately some the tracks had been captured incorrectly and we are embarrassed to say, but we got hopelessly lost! Luckily the friendly locals were able to show us the right way and after 17km of walking, we finally made it back to the hotel.

We spent the second morning getting a glimpse of what life was like at Lake Chilwa and what the locals have to face on a daily basis. It is really a surreal experience to look over the vast body of water, so calm and flat and that you could not see anything on the horizon except for maybe a small fishing boat.

This was a priceless experience and exchange.  We hope this joint venture will be the first of many and we would love to meet our fellow Malawian YouthMappers again someday and would gladly welcome them to South Africa.

This article was originally published on the YouthMappers Blog.

You can read the second part here. 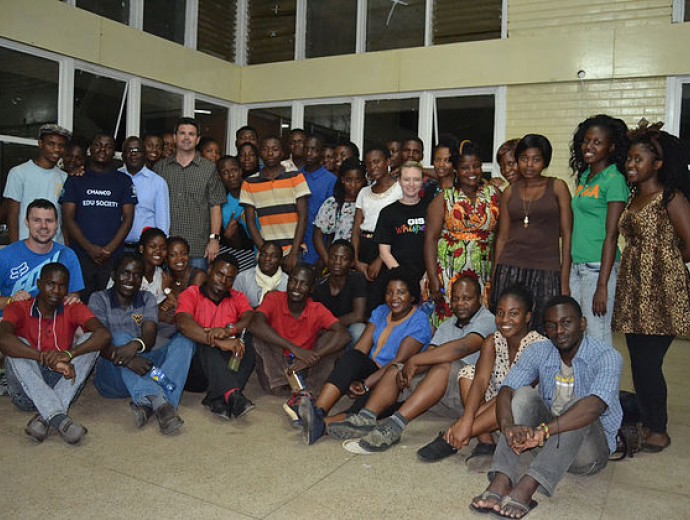