Quentin Guignard, a PhD student in the Department of Zoology and Entomology at the University of Pretoria, recently won a writing competition held in conjunction with the DST-NRF Centre of Excellence in Tree Health Biotechnology (CTHB) and The Conversation Africa. His cash prize of R30 000 will enable him to attend an international conference of his choice.

The judges ruled on the length of the articles, their relevance to the public and their accessibility to readers who are not scientists, which meant that they had to explain the scientific principles simply without using subject-specific jargon.

When interviewed to find out how he felt about winning this prize, Quentin said: ‘Winning this competition was proof to me that other people can be interested in what I am doing. I do not like overcomplicating things, but as scientists, we are so afraid of not being accurate enough that we tend to lose people’s attention when we talk to them. We don’t find the right words or the right way to explain to them that what we do is both exciting and important. This competition offered me an opportunity to find an easy way to pique people’s interest in what I am doing and to show how enthusiastic I am about it.’

He added that in his opinion it is very important that scientists communicate their knowledge to the public in order to increase general knowledge, raise awareness of problems—including ethical and health issues—and, in the case of his particular field of research, awareness of new ecological and economic threats. Effective communication of facts is also one of the best ways to fight the dissemination of misinformation and fake news.

The competition was open to PhD students and postdoctoral fellows in the Forestry and Agricultural Biotechnology Institute (FABI) and required the writing of an article on their research. Quentin’s prize-winning article will be published on The Conversation, an online platform that gives a journalistic spin to articles written by academics from institutions worldwide. Interested mainstream media then publish those articles as they appear on the various platforms.

Quentin’s PhD research (supervised by Prof Bernard Slippers and Dr Jeremy Allison) focuses on Sirex noctilio, a wood wasp pest that has been introduced into the southern hemisphere (including South Africa) and kills pine trees in plantations. ‘I am focusing on two aspects: visual and chemical ecology. Visual ecology is the study of the colours this insect can see, while chemical ecology focuses on the odours that S. noctilio can smell. Insects that want to mate typically communicate via visual cues and attractive odours called pheromones. I intend to understand how this attraction works, and to discover attractive pheromones and/or colours. The knowledge thus gained could be used to create an environmentally friendly trap, specifically designed to catch this species and help foresters to protect their trees,’ he explained.

Quentin has completed two master’s degrees with distinction: one in biology, diversity and environment at the University of Grenoble (2014), and the other in chemical ecology at the University of Lorient (France) (2016). In 2019 he received the award for the best PhD presentation at the annual general meeting of the Department of Zoology and Entomology, as well as a Young Entomologist travel grant from the Entomological Society of Southern Africa.

Quentin’s article will soon be published online to reach a global readership. 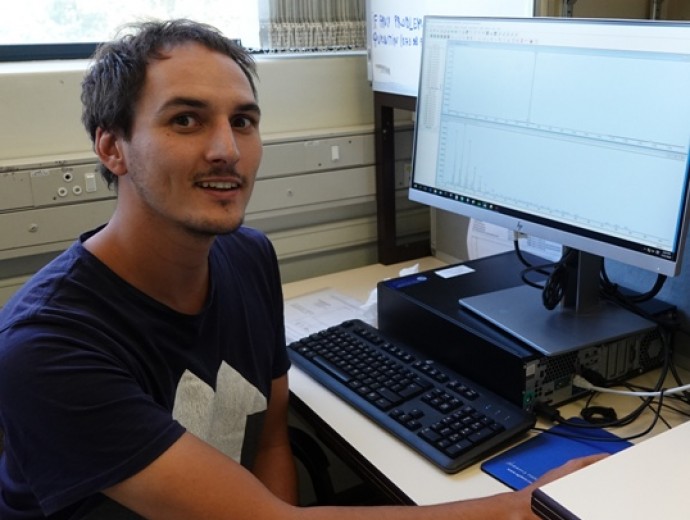