Three University of Pretoria (UP) scientists are part of a team whose research on African mole-rats has led to a discovery that may hold the key to pain management in humans.

The team’s research into African mole-rats, which are indigenous to the sub-Saharan region, led to the discovery that these rodents are insensitive to many different types of pain. This species’ adaptations to extreme environment (a lack of oxygen and a surplus of carbon dioxide underground, as well as a humidity close to saturation) could hold the key to further advances in human pain management.

Their unique findings are published in the latest issue of the prestigious American research journal Science.

According to Prof Bennett, the research “has revealed that as a consequence of genetic changes to its pain channels, the highveld mole-rat, which is found in South Africa’s Gauteng province, is able to live alongside venomous ants with painful stings that mole-rats avoid.” He explained that about ten years ago, Prof Lewin’s group, which investigated the unusual sensory world of the naked mole-rat, revealed that these burrowing rodents were remarkably resistant to pain when exposed to acid or capsaicin – the substance that gives chilli peppers their heat (PLoS Biology).

However, in their latest study, the UP researchers, along with colleagues from the Sokoine University of Agriculture and University of Dar es Salaam in Tanzania, investigated the extraordinary insensitivity to pain in other African mole-rats. Prof Bennett explained that, “The research team explored how eight other African mole-rat species related to the naked mole-rat respond to three substances that usually cause a brief burning sensation on the skin of human beings and other mammals. Those substances were: diluted hydrochloric acid, capsaicin, and allyl isothiocyanate (AICT). AICT is what gives wasabi, the condiment served with sushi, an extremely hot taste. The idea was that mole-rats are naturally exposed to these and similar substances in the wild. These behavioural experiments were performed at the University of Pretoria with Prof Lewin and his postdoctoral students.”

The study revealed that three mole-rat species proved to be insensitive to acid. Two species did not show evidence of pain after having a capsaicin solution injected into their paw.

Furthermore, only a single mole-rat species – the highveld mole-rat – proved to be unaffected by AICT. “AICT attacks amino acids in the body and can thus destroy proteins. That is why all the other species we know avoid coming into contact with the substance. The highveld mole-rat is the only species in the experiment that had no problem with AICT, while phylogenetically very closely related species showed a response to AICT,” Prof Bennett said. “The researchers at MDC took sensory tissue from the spinal cord and spinal ganglions of all nine species studied. Through the use of state-of-the-art DNA sequencing technology, Prof Lewin and his group were able to compare the activity of around 7 000 genes inside that tissue.” Relatively quickly, the MDC group observed that the activity of two genes were altered within the animals that felt no pain. These genes contain the blueprint for the ion channels TRPA1 and NaV1.7. “Interestingly, it is already known that these two channels are involved in the perception of pain,” Prof Bennett said.

AICT and many other irritants found in roots – one of the mole-rat’s main food sources – activate TRPA1. This is why, over the course of evolution, many species have downregulated the gene for this channel. The ‘wasabi channel’ is the only one to be completely switched off in the highveld mole-rat. “Prof Lewin went on to discover that this is down to a particularly active gene for another channel – the constitutively open channel NALCN, known as a ‘leak channel’,” Prof Bennett said. “The research group found that the expression of this channel was the only one that was significantly altered in the highveld mole-rat.”

During the course of evolution, the highveld mole-rat has clearly acquired an altered gene for a single ion channel, which has allowed it to make its home in places that are avoided by other species of mole-rat. “This discovery is yet another mind-blowing example of how environment shapes evolution over the longer term, and could lead to the development of highly effective painkillers for humans. The highveld mole-rat has showed us that high expression of the NALCN channel seems to be a very effective way of alleviating pain.”

Irritants that may penetrate the skin such as insect stings (bees, wasps, hornets and ants, which can bring about anaphylactic shock) and various nettles and other plant hairs that carry irritants which bring about pain could potentially be alleviated in future by the administration of chemicals that alter the movement of ions through membranes. “This could help ease pain and potentially save lives,” Prof Bennett said. “But this is another project for the future!” 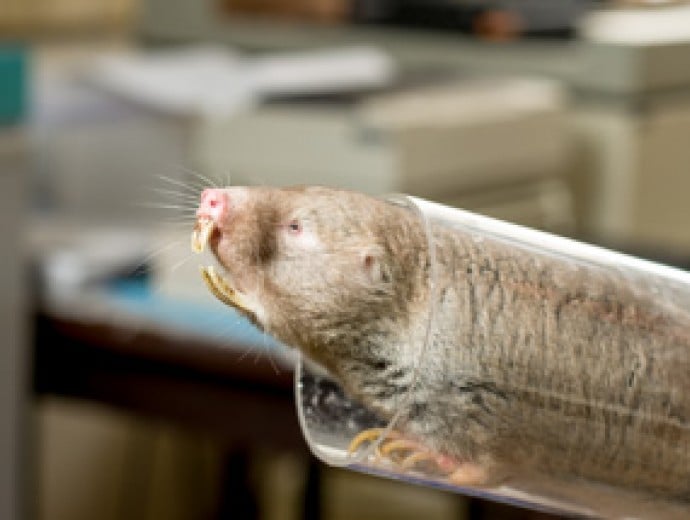