Communication is costly in Heaviside's Dolphins

Research led by scientists at the University of Pretoria (UP) has shed light on an evolutionary arms race with a twist. This research, conducted by Morgan J. Martin, a PhD student from UP has found that the small Heaviside’s dolphins (Cephalorhynchus heavisidii) selectively switch between cryptic, high frequency, echolocation sounds used to search for prey, and lower frequency communication sounds which help to maintain their highly social lifestyle. However, this switch may come at the risk of being heard by their key predator - killer whales (Orcinus orca).

Heaviside’s dolphins are found only in the Benguela Ecosystem along the west coast of southern Africa and range from southern Angola to the Cape of Good Hope in South Africa. They are one of the smallest dolphins on earth, smaller than a person (less than 1.7 m long) and found in shallow waters along the coast. “Heaviside’s dolphins are a poorly understood species of dolphin and we are working to collect as much baseline information as possible on their numbers and behaviour,” says Dr. Simon Elwen, a marine mammal expert at UP and Director of the Namibian Dolphin Project. What we know about sound use in Heavyside's dolphins

All dolphins use sound to find objects in their environment, such as fish. This process, called echolocation, involves the animal producing a sound commonly termed a ‘click,’ which hits a target, producing an echo which the animal hears and processes, effectively 'seeing the world with sound'.  Most dolphins also use other sounds, such as whistles, to communicate over long distances. Heaviside’s dolphins are one of 13 species of toothed whales that have lost the ability to produce whistles for communication.

Most dolphins echolocate with clicks which cover a range of frequencies, from around 10 kHz to 200 kHz. However, these 13 species have shifted their echolocation signals to occur only in an incredibly high and narrow frequency band around 130 kHz (almost seven times higher than the 20 kHz upper limit of human hearing and even above the hearing limit of killer whales). These acoustic adaptations are thought to reflect a type of acoustic crypsis, meaning that they decrease the risk of being heard by predatory killer whales.

Scientists from the Namibian Dolphin Project and UP first started recording Heaviside's dolphins in 2009 in Walvis Bay, Namibia. “When we first recorded the dolphins, we noticed unusual features to the sounds, which Morgan Martin has investigated further,” says Dr. Tess Gridley (now based at the University of Cape Town). In contrast to the prevailing idea that many dolphin species are effectively acoustically hiding from predators, Ms Martin’s results showed that Heaviside’s dolphins are commonly producing communication signals consisting of click sounds at a much lower frequency and with a more broadband structure (i.e. the sounds cover a range of frequencies). This makes them very different from other similar dolphins and porpoises, a result which has surprised scientists worldwide. These lower frequency clicks are risky to produce because they can easily be heard by eavesdropping killer whales which potentially increases the chance that Heaviside’s dolphins end up on the dinner table.

“Heaviside’s dolphins seem to be hunting and navigating using typical narrowband high-frequency clicks but use riskier lower frequency clicks when they communicate with each other,” explains Ms Martin.

The research team then started wondering about why these dolphins would switch to signals that were more likely to be heard by potential predators when they could stick to their “safer” cryptic biosonar signal. “The lower frequency of these communication signals means that they are less directional and travel further underwater, so they are much more effective for social communication,” says Dr. Frants Jensen, a bioacoustics expert at Aarhus Institute of Advanced Studies and co-author of the study.

“So far, this seems to be the only narrowband high-frequency species that selectively increases communication range by changing the structure of their clicks,” emphasises Ms Martin. The team’s initial paper on the research, “Heaviside’s dolphins relax acoustic crypsis to increase communication range,” was published on 18 July in the Proceedings of the Royal Society of London B.

For months ago, Ms Martin and her team observed a pair of killer whales attacking and killing a Heaviside’s dolphin right after they had observed the dolphins socialising in a group nearby. It is possible that their lower frequency communication sounds gave the dolphins away to the lurking predators.

While research has shown how these sounds are important for communication, Ms Martin emphasises that there’s still much more to learn, “These dolphins communicate by emitting bursts of very rapid clicks (more than 500 clicks per second) at highly varying repetition rates. We don’t yet know what information they can encode when they produce these sounds, but we are trying to find out.” She adds that the next paper will link specific sounds produced underwater with surface behaviours to understand the function of different social signals. 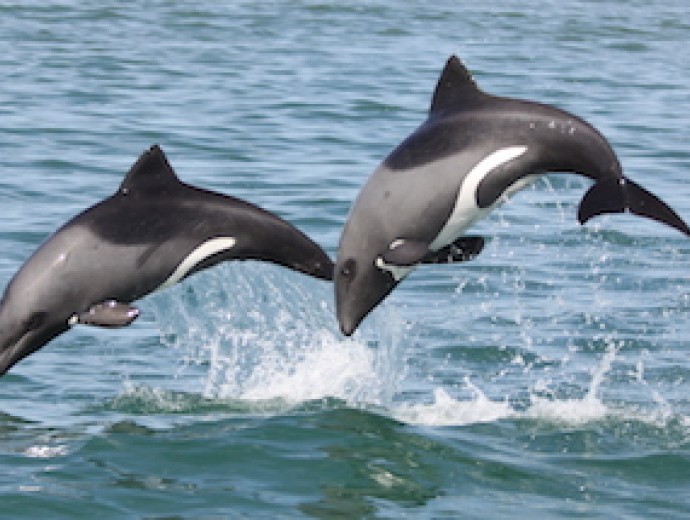