Dr Kshitij Thorat is an astronomer and a postdoctoral fellow at the University of Pretoria (UP). He is a member of UP’s astronomy group within the Department of Physics at the Faculty of Natural and Agricultural Sciences. He specialises in doing research with the MeerKAT telescope and using artificial intelligence (AI) in astronomy. He’s part of the team that has solved the mystery of X-shaped radio galaxies with the help of striking images from the MeerKAT telescope and second author of the study whose results will be published in the Monthly Notices of the Royal Astronomical Society (with a pre-print available here).

I have been doing radio astronomy ever since my days as a PhD candidate, when I helped survey a large area of the sky as seen in “radio” light. Following that, I have been working as a postdoctoral fellow in South Africa for nearly five years. The focus of my research has been objects powered by supermassive black holes jets in the distant universe. One of the main reasons I chose to come over to South Africa for postdoctoral work was the appeal of the MeerKAT telescope, which back then was under construction, and which excels in making detailed images of such objects. My time at Rhodes University as a postdoctoral fellow gave me a chance to participate in some of the very first studies done with MeerKAT. So far, I have co-authored eight publications based on MeerKAT observations and several more are on the way. Many of these have been published in the last year or two, after the inauguration of the telescope. Last year, when a call was made for observation proposals using MeerKAT, we submitted a proposal (one of the only 38 proposals which were accepted) to study a carefully selected sample of X-shaped sources, expecting the telescope to produce images of unprecedented quality. This expectation has been borne out fully. Of course, since MeerKAT (and other telescopes) produce such a large amount of data compared to older telescopes, we need to use a lot of automation and smart algorithms to analyse the data efficiently and effectively. I am an expert in the data-intensive process of converting the petabytes of raw data to beautiful images such as the one seen in this press release. I also focus on machine learning techniques to solve issues arising from the transition of astronomy towards big data regime. One of the issues I am especially interested in is automatically identifying sources with unusual morphologies, for example, X-shaped galaxies. Along with Dr Arun Aniyan, my colleague, I have made a tool to identify radio sources using what are known as convolutional neural networks. We were the first to use this technique in radio astronomy. Since then, the field has advanced quite a bit. We have an active collaboration with UP’s Computational Intelligence Research Group (CIRG), with co-supervised students pursuing AI-enhanced astronomy projects, and this is an ideal place to further this line of research.

That was a long time ago, when I was still an undergraduate student. Astronomy back home in India was really taking off and one had access to a lot of material on astronomy at a popular level. It was really the amazing pictures of our universe which made me interested in astronomy.

Currently there are several ideas on how X-shaped galaxies come by their shape. Two of the most interesting ones are that either something changes in the engine which powers these sources - a supermassive black hole sitting at the centre of the galaxy, or that it has to do with the environment in which these sources sit. You could compare it to the nature-vs-nurture debate in the field of psychology. In this particular case, we found several pieces of definite evidence that the X-shape is caused by the latter explanation. This was suspected through earlier studies of this source, but the far superior observations with MeerKAT were instrumental in confirming the correct formation scenario. The jury is still out on whether most (if not all) X-shaped galaxies are formed in such a way, but we are working on that with further MeerKAT observations of more galaxies.

We are still a small community in South Africa but with a huge interest from students who want to pursue astronomy at a postgraduate level. The research group at UP has grown quickly, becoming a significant component with the Department of Physics in a short space of time. I would say the next five years will determine to what degree astronomy becomes ‘mainstream’ at UP and in South Africa in general. 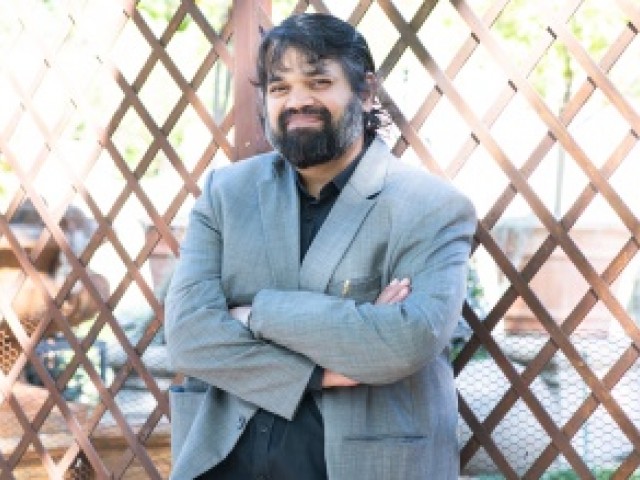 Dr Kshitij Thorat, second author of the paper and postdoctoral fellow at the University of Pretoria