When we ponder upon Alaska, most people’s minds immediately go to the United States of America’s largest state. That Alaska state consists of lush green fields at the feet of white, snowy mountains. However, in South Africa, Alaska refers to a dry, dusty area at the foot of a mountain covered with informal dwellings instead of snow. These dwellings are constructed out of corrugated iron and other pieces of scrap metals (refer to Figure 1). Informal settlements are a common occurrence in developing countries such as South Africa. In this blog post, we will report on our experience and lessons learned from mapping the informal Alaska settlement in the City of Tshwane Metropolitan Municipality, South Africa.

What is an informal settlement? Informal settlements are commonly defined as unplanned settlements. These settlements consist of dwellings and in South Africa they are mainly constructed out of corrugated iron and other scavenged materials. The dwellings do not comply with planning and building regulations and are therefore often deemed as unauthorised housing. Informal settlements are commonly located on the periphery of towns and cities, lacking access to most basic services such as clean water, sanitation, waste removal services and electricity supply. As a result, community members need to perform daily chores, such as collecting firewood and water from communal locations, in order to do such activities as cooking food or bathing. Electricity is generally illegally tapped from nearby formal housing. This often results in illegal and highly dangerous electrical connections. Informal settlements lack any form of formal addressing. In Alaska, for example, multiple addresses can be found on a single dwelling. A census barcode, as well as a number assigned by the community, can be found on each dwelling in the settlement (refer to Figure 2 for an example). How did we map this settlement? There are various ways to map informal settlements. Examples include using OpenStreetMap (OSM), unmanned aerial vehicles (UAVs) and LiDAR technology. UAV and LiDAR technologies are still quite expensive which presents a major barrier for their use. Additionally, none of the previously mentioned methods (i.e. OSM, UAV or LiDAR) could be used for mapping Alaska because without physically going out into the field, one will not be able to collect additional information such as the dwelling addresses, locations of shops or communal water points. We therefore decided to make use of handheld GPSs, as well as mobile phones. Each phone had a data collection application, EpiCollect+, preloaded onto it. Using these tools, we successfully collected 2,500 dwelling locations along with their associated addresses, locations of shops, communal water points, as well as any health hazards we came across. Collecting these 2,500 points took a full four days’ time out in the field - Phew!

What did we learn about collecting data in an informal settlement? Being engulfed within Alaska and collecting data was a great opportunity not only for implementing our knowledge of data capturing, but also for getting a glimpse into how this community functions. Some of the challenges we encountered included:

Even though there are various challenges, collecting in-situ data has a number of advantages: Figure 3. Example of dwellings with paintings on

What is next? The first step we took after collection the in-situ data was to clean it. This was done to ensure the best possible quality of the dataset before using it to perform further analysis and mapping. We hope to inspire empowerment within the community members of Alaska through the maps produced from this dataset. In addition, the dataset collected on the various footpaths in the settlement has been cleaned and will be uploaded and made available in OpenStreetMap.

We hope this blog has provided you with some insight into mapping informal settlements.

This article was orignially published on the YouthMappers Blog. 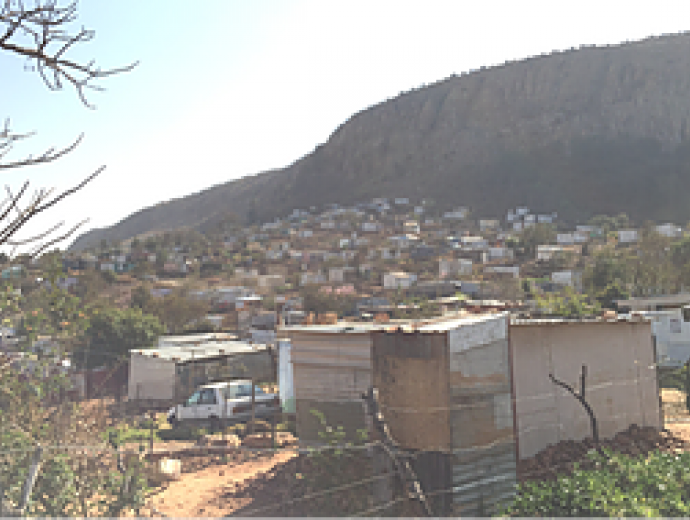