UP participates in Summer School on Geomatics in Germany

A summer school where smartphone apps are developed to facilitate increased citizen participation in nature conservation was recently hosted in Germany. The first 'Geomatics and Participation' Summer School with students and lecturers from the University of Pretoria (UP) and the Karlsruhe University of Applied Sciences (HsKA) took place in Karslruhe.

Since September 2015, the Baden-Württemberg Stiftung has supported the 'Geomatics and Participation Summer School – a study of and research in the tension field between a European technology region and an African emerging country.' The project between UP and HsKA falls under the Baden-Württemberg-STIPENDIUM für Studierende – BWS plus programme. The project runs for three years and project funding amounts to  €125 000. The purpose of the project is to initiate long-term collaboration between the German and South African universities. Amongst others, a Summer School will be held at each university during which students of both universities collaborate on a project.

Prof Dr Gertrud Schaab and Mr Christian Stern from the Faculty of Information Management and Media at HsKA prepared a versatile programme for the 18 participants, of which six were Geomatics master's degree students from Karlsruhe, eight Geoinformatics students from UP and their lecturers, Prof Serena Coetzee and Ms Victoria Rautenbach.

On the first afternoon, lectures were presented on 'Why nature conservation?' and on the representation of the landscape development in the Upper Rhine River Valley on historical maps. On the second day, participants visited the study area, the 'Rastatter Rheinaue' nature conservation area. First, they had a guided tour with representatives of the Umweltstiftung Rastatt and the Stadt Rastatt, later they went on a canoeing tour. This provided participants with the opportunity to develop ideas for mobile mapping apps that could lead to increased citizen participation and active learning about nature conservation. 'It remains to be seen how much progress we will be able to make with the app development during the two weeks,' Prof Dr Schaab said, 'but we also hope to demonstrate differences in relevance and acceptance of citizen participation between Africa and Europe. At the same time, participants should get the opportunity to learn and experiment with new technologies and developments in geomatics.'

Another Summer School will be hosted in a year's time in Pretoria. In both summer schools, the participants will collaborate on a project related to 'Participatory Sensing'. Due to the widespread use of smartphones with a variety of embedded sensors, citizens increasingly participate in data collection and sharing. Therefore, participants of the Summer School in Karlsruhe will explore these new possibilities through the development of mobile mapping apps to increase citizen participation in nature conservation.

Apart from the acquisition of professional competencies, inter-cultural exchange plays an important role. For this, an appropriate socialising programme is required. The South African students got to know Baden-Württemberg, specifically Karlsruhe, and will take home the impression of a study or research visit to this part of Germany. 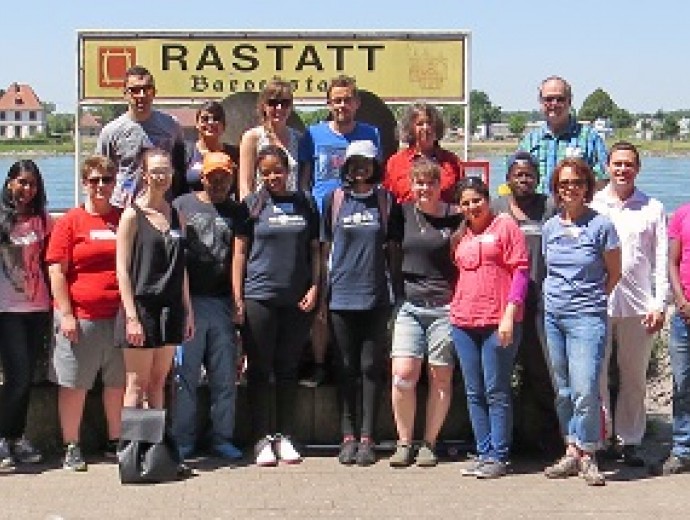 UP participants at the Rastatter Rheinaue nature conservation area