The University of Pretoria (UP) celebrated the International Map Year (2015/16) in three ways this year. The first being the Centre for Geo-information Science (CGIS) Map Competition, a map assignment challenge for first-year and third-year students in BSc Geo-informatics and most importantly, the 2015 CGIS Mini-conference.

The 2015 CGIS Mini-conference with the title Maps in research at UP aimed to showcase the role of maps in research conducted at the University. To this end, postgraduate supervisors from across the University were invited to nominate students under their supervision for presentations at the mini-conference. The criteria specified that presentations had to have the words ‘map’ or ‘mapping’ in the title and abstracts had to describe the role of maps in the research.

A variety of presentations from multiple disciplines were received and showcased the use of maps in research at UP. The following examples of how widely maps are used in research at the University can be cited: the use of maps in different departments and faculties; maps are used in inter-disciplinary research, such as in  cartography and psychology which are combined in research that makes use of eye tracking to study how people read and understand maps. Maps are also used in multi-disciplinary research, where, for example researchers draw on cartography and geography/plant science in research that aims to spatially analyse / understand natural and human-made phenomena around us.

The presentations included ‘traditional’ uses of mapping and spatial analysis to help researchers understand the natural environment; to assist in planning for urbanisation; and to help plan for much needed renewable energies. There were also presentations on novel high-tech applications of cartography, such as augmented reality and 3D eye tracking. Finally, the keynote address on forensic mapping was a less frequently heard of, but fascinating application of mapping.

All the presenters were UP students who are supervised in more than one faculty and in various departments. In some cases co-supervisors were from other universities or research councils. At the end of the mini-conference, the winners of the 2015 UP CGIS Map Competition received their prize money and a map atlas donated by Esri.

In addition to the mini-conference, the University also celebrated International Map Year 2015/6 with an exhibition of maps in the UP library. The exhibition showcased maps produced by students, staff and other organisations. Some interesting map books from the library were on display, including a population map from 1904. 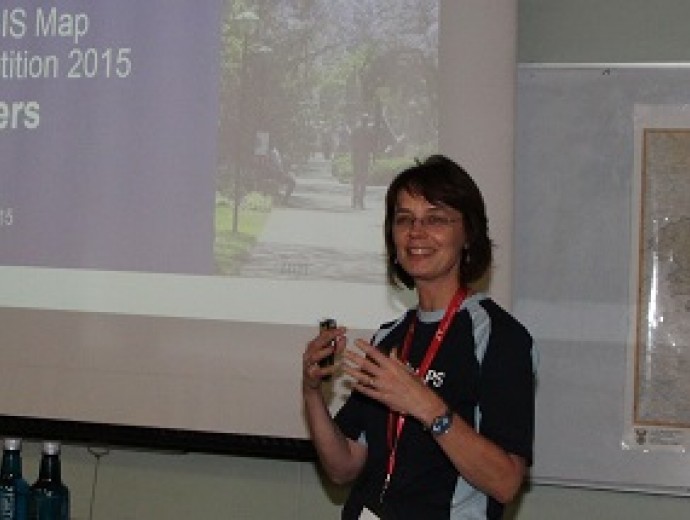