On Monday, 2 December 2019, the Department of Mercantile Law in the Faculty of Law of the University of Pretoria had the privilege of celebrating the contributions of three legends ― Professors Piet Delport, Johan Lötz and the late Professor Chris Nagel, with combined expertise experience of approximately 108 years.

The Department honoured these three professors by launching a book series, titled De Serie Legenda Developments in Commercial Law (order form herewith), in dedication of their academic lives and work. Volume I in the series commemorated the contributions made by Nagel to academia and is titled Law of  Specific Contracts and Banking Law, whereas Volumes II and III celebrated the contributions respectively made by Lötz  and Delport with the titles Law of Specific Contracts and Consumer Protection Law and Entrepreneurial Law.

Although the Department was cautioned that a project of such magnitude would have been impossible to complete within the limited period it had set for itself, the project was completed successfully and timeously.  The extraordinary dedication and care that LexisNexis, the managing and volume editors, the members of the Department of Mercantile Law, the authors, the anonymous peer reviewers and the family and friends of the three legends invested in completing the series bear witness to the impact that our legends had on the lives of their peers and students.

It was during this process that we have once again realised that Delport, Lötz and Nagel not only had successful careers, but that they also had significant careers. Most often, our most significant work cannot be measured in specific outcomes, but in what we pass on to others. Professors Monray Marsellus Botha and Jacolien Barnard acted as managing editors for the three books, assisted by Professors Melanie Roestoff, Reghard Brits, Hermie Coetzee, and by volume editors Doctors Jani Van Wyk and Carika Fritz.

A UP Club Hall filled with esteemed colleagues, dear friends and accomplished former students, some of whom have travelled from abroad, accentuated that which our three professors have passed on to others. Botha, in his capacity as Head of the Department of Mercantile Law, delivered the keynote address on “Legends, heroes and academic citizens” which showcased the role, respect and contributions these three professors made in their long and illustrious academic careers and the respect that people has for them nationally and internationally.

Lötz and Delport are retiring at the end of this year and their presence in and contributions to the Faculty of and the legal academic arena will be sorely missed.

Although all present were painfully aware of Nagel’s physical absence, our fond memories of him filled the hall and our hearts. As Barnard so aptly concluded “Chris, Lötz and Piet, we salute you, because you did it your way! Salute!” 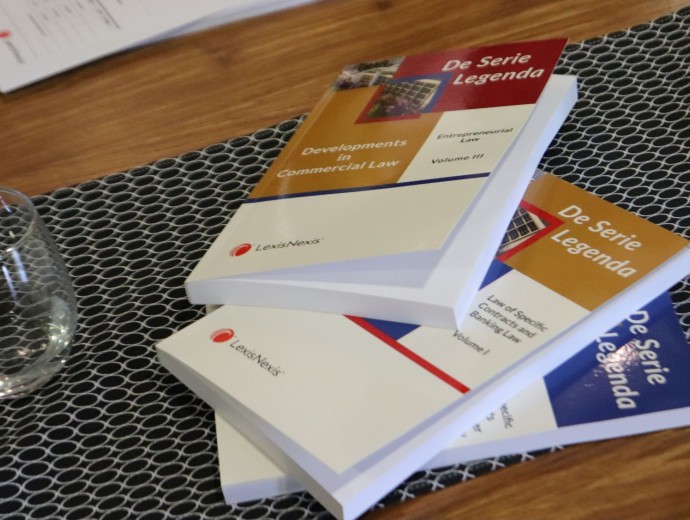