Maputo Protocol turns 15! A call for states to ratify and implement the Protocol- moving from rhetoric to action

“Inequality can be done away with only by establishing a new society, where men and women will enjoy equal rights, resulting from an upheaval in the means of production and in all social relations. Thus, the status of women will improve only with the elimination of the system that exploits them….” Thomas Sankara

Since Sankara uttered these words, the African continent has made some strides towards eliminating the system that exploits and discriminates against women. One of these steps is the adoption of the Protocol to the African Charter on Human and Peoples’ Rights on the Rights of Women in Africa (Maputo Protocol) on 11 July 2003 in Maputo, Mozambique, it later came into force in 2005.

The Maputo Protocol is the continent’s foremost legal instrument on women’s rights. In fact, the Protocol is lauded as being the world’s most comprehensive binding legal instrument on women’s rights for its breadth of coverage and innovative provisions. As to its breadth, the Protocol includes all categories of rights from civil and political to socio-economic and even third generation rights articulated from a women’s rights perspective. However, it is on innovation that the Maputo Protocol truly comes into its own. It records a number of global firsts including being the first binding treaty to have provisions on: the right to a medical abortion, women’s rights in the context of HIV/AIDS, prohibition of harmful practices such as child marriage and FGM among other notable firsts. In addition, the Protocol has also been celebrated for having an authentic African fingerprint in being an African tailored solution for African problems. This brief snapshot illustrates what a strong framework for protection exists for women in Africa.

With the ratifications to date, 75% of women in Africa are now under the protective cover of the Maputo Protocol. Ratification is however just a first step. Having ratified the Protocol, states must not rest on their laurels, and must embark with haste in ensuring that the Protocol alters the lived realities of women in their countries. This can be achieved through domestication, harmonisation of national laws to be in line with the Protocol and popularization of the Protocol to ensure that women and girls know of the expansive catalogue of rights that they are entitled to. They must also remember to present a report to the African Commission on Human and Peoples’ Rights within two years of ratifying the Protocol noting their initial successes and challenges in compliance with Article 62 of the African Charter and Article 26 (1) of the Maputo Protocol.

The Centre for Human Rights wishes to congratulate member states of the Protocol on this day whist urging them to take every necessary step to ensure its implementation and also calls upon all the states that have not ratified to do so. The Centre is at hand to offer states its technical support particularly in the development of state reports. In this regard, interested states can write to [email protected] for further details.

DON’T WAIT ANOTHER 15 YEARS FOR WOMEN AND GIRLS TO ENJOY THEIR RIGHTS. ACT NOW! 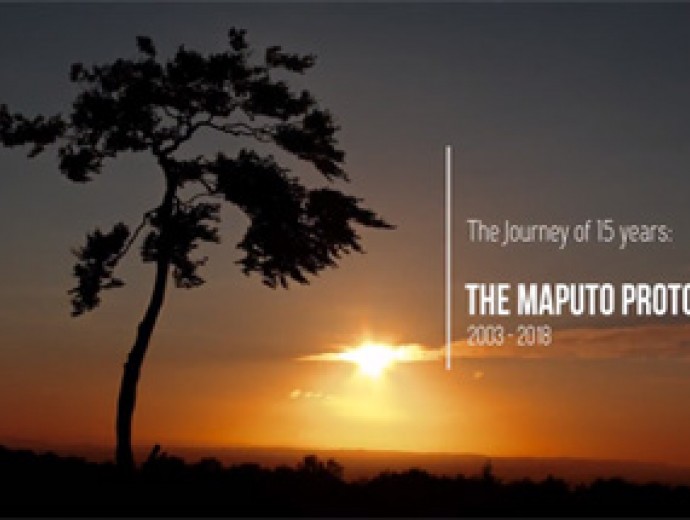 Maputo Protocol turns 15! A call for states to ratify and implement the Protocol- moving from rhetoric to action