Report: Rwanda’s withdrawal of its acceptance of direct individual access to the African Human Rights Court

On 11 March 2016, the Centre of Human Rights,  Faculty of Law,  University of Pretoria, held a panel discussion on the legal and political consequences of Rwanda’s withdrawal of its declaration under article 34(6) of the Protocol to the African Charter on Human and Peoples’ Rights on the Establishment of an African Court on Human and Peoples’ Rights (African Court Protocol), which provides for the right of individual access to the African Court on Human and Peoples’ Rights (African Human Rights Court). The panel discussion consisted of Professor Frans Viljoen, Director of the Centre for Human Rights; Professor Dire Tladi, Professor, Department of Public Law, Faculty of Law, University of Pretoria and a member of the International Law Commission; and Professor Michelo Hansungule, Professor,  Centre for Human Rights; and legal counsel in two of the cases against  Rwanda submitted to  the Court.

Having started operating in 2006, the African Human Rights Court in 2016 marks ten years of existence. However, these ten years have yielded a meagre crop of judgments. So far, the Court has delivered only one advisory opinion, in which it regrettably adopted the position that the African Committee on the Rights and Welfare of the Child is not competent to refer cases to the African Court. The Court decided only four cases on the merits, two against Tanzania (Mtikila and Alex Thomas) and two against Burkina Faso (Zongo and Konate).

All African Union member states (except South Sudan) are party to the African Charter, and therefore accept the competence of the African Commission on Human and Peopels’ Rights. Of these states, 30 have accepted the African Human Rights Court’s jusrisdiction to hear and decide complaints by individuals (by ratifying the African Court Protocol). Individuals in these states may not approach the Court directly, but may submit cases to the Commission. The Commission may, in turn, refer the case to the Court. Eight of the 30 states have accepted the optional and exceptional procedure of allowing individuals to direct access to the Court (by making a declaration under article 34(6) of the Court Protocol).

Article 34(6) reads as follows: “At the time of the ratification of this Protocol or any time thereafter, the State shall make a declaration accepting the competence of the Court to receive cases under article 5 (3) of this Protocol. The Court shall not receive any petition under article 5 (3) involving a State Party which has not made such a declaration”. Article 34(7) adds:  “Declarations made under sub-article (6) above shall be deposited with the Secretary-General, who shall transmit copies thereof to the State parties”.

The Ingabire Victoire Umuhoza case: This concernsMs Ingabire Victoire Umuhoza, a Rwandan citizen. She contends that when the genocide in Rwanda started in April 1994 she was in the Netherlands to further her university education. She became the leader of a political party known as Rassemblement Républicain pour la Démocratie au Rwanda. In the year 2010, after spending nearly seventeen years abroad, she decided to return to Rwanda to contribute in nation building.

On 21 April 2010, she was remanded by the police and placed under detention. She was accused of having committed crimes of spreading ideology of genocide, abetting terrorism, undermining state security, spreading rumours which may incite the population against political authorities, attempted recourse to terrorism and the establishment of an armed branch of a rebel movement. She was then sentenced to 8 and later 15 years imprisonment by the High Court and the Supreme Court of Rwanda, respectively. She contends that the African Charter has been violated in relation to her conviction and sentence.

TheKayumba Nyamwassa case: This concerns the amendment of article 101 of the Constitution of Rwanda, which provides as follows: “The President of the Republic is elected for a term of seven years renewable only once.
Under no circumstances shall a person hold the office of President of Republic for more than two terms”. The Rwandan Parliament inserted article 172 into the Constitution, thus extending the current Presidents term with another seven years after completing his current term in office which should end in 2017.

Article 172:(The President of the Republic) reads as follows:

“The President of the Republic in office at the time this revised Constitution comes into force continues to serve the term of office for which he was elected. Without prejudice to Article 101 of this Constitution, considering the petitions submitted by Rwandans that preceded the coming into force of this revised Constitution, which were informed by the particular challenges of Rwanda’s tragic history and the choice made to overcome them, the progress so far achieved and the desire to lay a firm foundation for sustainable development, a seven (7) year presidential term of office is established and shall follow the completion of the term of office referred to in the first paragraph of this Article. The provisions of Article 101 of this Constitution shall take effect after the the seven (7) year term of office referred to in the second paragraph of this Article”.

The Kennedy Gihana case: This case concerns the cancellation of passports of Rwanda nationals abroad.

The first of these cases, Ingabire Victoire Umuhoza v Rwanda, was scheduled for hearing by the Court on 4 March 2016.   A few days before that date, on 24th February 2016, the government of Rwanda sent a note verbale officially withdrawing its declaration to AU Commission and African Court. The text of the note verbale reads as follows:

WHEREASArticle 5(3) of the Protocol stipulates that the Court may entitle relevant Non-Governmental Organisations (NGO’s) with observer status before the Commission and individuals to institute cases directly before it, in accordance with article 34(6) of this Protocol;

WHEREAS Article 34(6) of the above mentioned Protocol stipulates that at the time of the ratification of the Protocol or any time thereafter, the State shall make the declaration accepting the competence of the Court to receive cases under article 5(3) of the Protocol, and the Court shall not receive any petition under article 5(3) involving a State Party which has not made such a Declaration;

WHEREAS  on 22nd day of January, 2013 the Republic of Rwanda unilaterally made the above mentioned Declaration;

CONSIDERING the 1994 genocide against the Tutsi was the most heinous crime since the Holocaust and Rwanda, Africa and the world lost a million people in a hundred days;

CONSIDERING that a Genocide convict who is a fugitive from justice has, pursuant to the above-mentioned Declaration, secured a right to be heard by the Honourable Court, ultimatley gaining a platform for re-invention and sanitization, in the guise of defending the human rights of the Rwandan citizens;

CONSIDERING that the Republic of Rwanda, in making the 22nd January 2013 Declaration never envisaged that the kind of person described above would ever seek and be granted a platform on the basis of the said Declaration;

CONSIDERING that Rwanda has set up strong legal and judicial institutions entrusted with and capable of resolving any injustice and human rights issues;

NOW THEREFORE, the Republic of Rwanda, in exercise of its sovereign prerogative, withdraws the Declaration it made on the 22nd day of January 2013 accepting the jurisdiction of the African Court on Human and Peoples’ Rights to receive cases under article 5(3) of the Protocol and shall make it afresh after a comprehensive review.

In this context, the government of Rwanda did not appear for the hearing of the case. The Court did not entertain any arguments, but re-scheduled the case for its session in May. The expectation is that, after an exchange of pleadings during the intersession, the question of the legal validity and potential consequences of the withdrawal, and of the merits of the case, if it comes to that, would be determined at the next session.

There is no provision in the African Court Protocol regulating the withdrawal from either the Protocol, or of a declaration under article 34(6). In the absence of any specific prescription in the treaty, the general rule is that the general rules in treaty interpretation, as set out in the Vienna Convention on the Law of Treaties (VCLT), apply. Rwanda acceded to the VCLT in 1980.

2. A party shall give not less than twelve months’ notice of its intention to denounce or withdraw from a treaty under paragraph 1”.

Does the Rwandese government’s note verbale constitute a withdrawal?

Some uncertainty was expressed about the meaning of the “withdrawal” issued by Rwanda. Uncertainty arose due to the insertion of the phrase “and shall make it afresh after a comprehensive review”.  Some participants felt it is at best a “purported withdrawal”; it was also suggested that was a “conditional” or “suspended” withdrawal. Most participants however seemed to agree that, as a unilateral statement undoing a voluntary act, it was a “withdrawal” plain and simple.

Is the withdrawal legal/allowed for?

What are the implications of the withdrawal?

Most participants agreed that its effect is not retroactive or retrospective. Even if the withdrawal is valid, it does not affect cases that have already been submitted. The Court will therefore be competent to deal with the merits of the Ingabire Victoire Umuhoza case in its May session, and with the other five cases pending before it.

For future cases, assuming that Rwanda’s withdrawal is valid, the individuals affected can still submit cases to the Commission, which may in its discretion still refer these cases to the Court. In other words, by not undoing its ratification of the Court Protocol, Rwanda is still accepting the jurisdiction of the Court – but only in respect of cases referred to it indirectly, by the Commission. In other words, despite the withdrawal of the article 34(6)-declaration, Rwanda still accepts individual access albeit only indirectly. 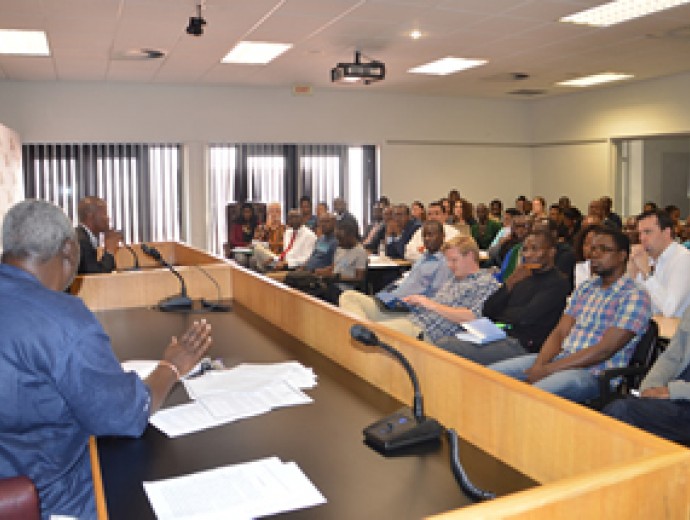 Report: Rwanda’s withdrawal of its acceptance of direct individual access to the African Human Rights Court