Being born with only 5% sight could be a valid reason to not accomplish many things. However, not so for Theodor Loots. He completed his schooling at the Prinshof School for the Visually Impaired, where he was appointed as head boy in 2002. In 2000, he obtained the title of the first blind man in Africa to acquire a black belt in judo. He went on to pursue his tertiary studies at the University of Pretoria (UP), enrolling for Actuarial and Financial Mathematics in the Faculty of Natural and Agricultural Sciences. During his third year of study, his eyesight deteriorated to such an extent that it couldn't be depended on for any practical purposes. He then equipped himself with the American braille code for mathematics as quickly as he could, which enabled him access to more resources. This initial approach allowed him to complete his exam papers in braille and then read it back to the lecturer, who would write down the answers and proceed to mark the papers. Later on, this strategy was fully automated by the use of technology, so that papers and assignments didn't have to undergo this very tedious transcription process.

Loots's story is remarkable as he went on to become a husband to Katryn Loots, the father of three children, and the first blind man to obtain a master's degree in Mathematical Statistics with distinction (recognised by the S2A3 bronze medal). What is even more remarkable is that he recently completed a PhD in Mathematical Statistics and graduated from the University of Pretoria on Wednesday, 6 September 2017.

After initially being employed in the financial industry, Loots joined the University of Pretoria as lecturer in the Department of Statistics in 2013. His early career as an academic is already characterised by a number of national and international publications and collaborations.

On receiving the PhD, Dr Loots said, 'Sad will be the day, upon summiting a mountain, one comes to the realisation that it has been a solitary ascent. So much greater is the adventure when shared with others, and this then is a testimony to all those that have shared in the journey; the God that is sustaining me daily, the family that shapes me, the supervisor that endures with me, and the village that feeds me.' 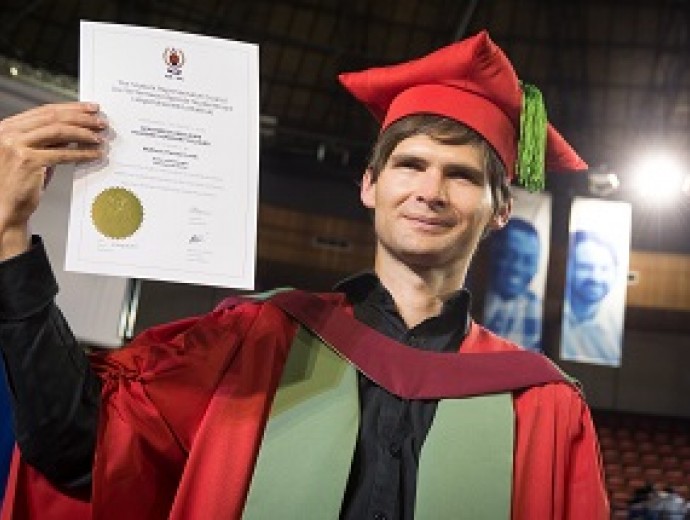