Reaching the finish line against all odds

On Tuesday, 9 May, the Department of Historical and Heritage Studies in the Faculty of Humanities at the University of Pretoria (UP) had its Annual Awards Ceremony at the Merensky 2 Library Auditorium. The theme was, 'Reaching the finish line against all odds' as introduced by lecturer, Karina Sevenhuysen. Professor Karen Harris, the Head of Department, welcomed the guests to what she called a special day and introduced the recipient of the Special Award.

This was UP student, Ms Mashooda Sedibeng, who exemplified the theme of the event. Her story is one of great inspiration and encouragement. She became blind due to glaucoma at the age of six. She attended Prinshof School for the Partially Sighted and Blind in Pretoria and completed her matric in 2008 with exemption. She then enrolled at UP, even though her friends encouraged her to study elsewhere. Her reason for this, she says, was that she did not want to study far away from Loftus, because she loves the Blue Bulls and UP is right next door.

At UP she obtained a certificate in Sport Science in 2010, and in 2011 she started a BA degree, majoring in History and Heritage Studies, which she completed in 2016. Being blind, she faced many challenges but managed to overcome all of them, of which she says, 'It made me a stronger person.'

Ms Sedibeng was also involved in extracurricular activities and was the chairperson of BOLD (Beyond Our Limiting Disabilities), a society at UP for people with disabilities based at the Disability Unit on campus. She was also instrumental in establishing a goalball team and blind cricket at UP.

Armed with her BA degree, she wants to make heritage and historical sites accessible for people living with disabilities and to create an environment where people living with disabilities can be free and not have to depend on others to enjoy the natural and cultural environment. She would very much like to be a human rights activist, focusing on disabled people's rights.

Ms Sedibeng ended her address with these inspiring words: 'Live your dreams even when times are hard. Look at yourself in the mirror and say, "Tomorrow is another day!"' Ms Sedibeng and her family with Prof Karen Harris 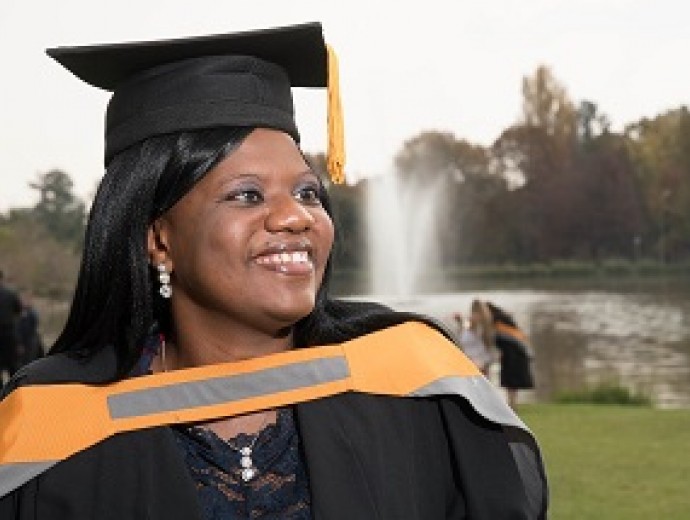