Johan Liversage, one of the lecturers in the Molecular and Cellular Biology module says the first-year students enrolled in this module come from diverse backgrounds and levels of understanding regarding cellular biology. In previous years the students were asked to make analogies for the various cellular structures as a short tutorial exercise only after the themes has been covered in class. In order to lay down a solid foundation for the students from the start, he decided to give them a virtual tour of a city and to draw a table which they can complete during the class sessions as the various structures and “buildings” in the cell are discussed.

Johan explains that every single structure and building/institution in a city plays a particular role that ensures that the city as a whole can function effectively. In class sessions, the students are given the opportunity to discuss what building/structure/region should be given to a specific organelle (structure in a cell that performs a specific function) and what will happen to a city if that building/structure/region should not be able to perform its intended function (see Figure 1 for a visual representation). This approach allows the students to be able to make the connection to diseases that occur on a cellular level, says Johan. For instance, if a city’s recycling trucks break down waste within the city boarders will build-up over time and will start to block the roads and results in a decline of efficiency in which a city can perform tasks – eventually the city will come to a stand still. At a cellular level, lysosomes are responsible to degrade and recycle incoming food particles and defective organelles. In the case of Tay-Sachs disease, lysosomes are unable to degrade glycolipids in neurons which results in a build-up of these lipids overtime and eventually the central nervous system will shut down. Reinforcing the “Cell City” analogy in every lecture the students are able to “build” their city overtime and make the connection to cellular functions and eventually diseases at a cellular level should one or more of the “buildings/institutions” be unable to perform their functions. 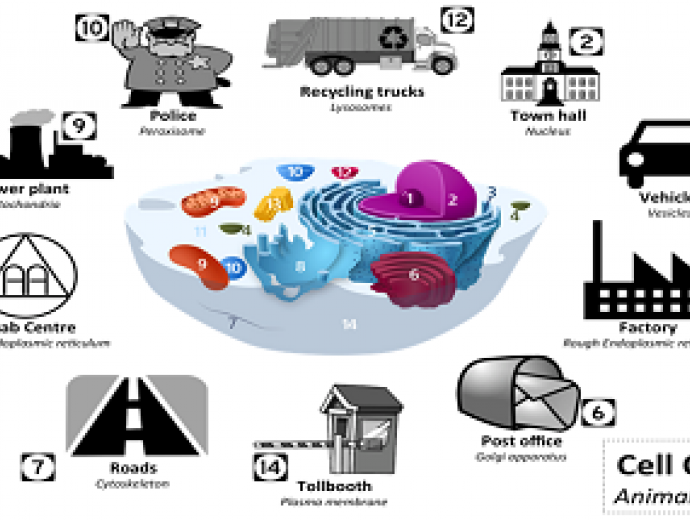 Images and analogies for Cell City