Official opening of the Tšwelopele Building on the Prinshof Campus

The newly built Tšwelopele Building on the Prinshof Campus of the University of Pretoria (UP) was officially opened by the Honourable Minister of Health, Dr Aaron Motsoaledi, and the Vice-Chancellor and Principal of UP, Prof Cheryl de la Rey on Monday, 15 August 2016.

Speaking at the opening, Dr Motsoaledi congratulated UP for completing the building complex to the highest standard, on time and on budget. 'This is exemplary use of public funds. I would like to express my appreciation to all those involved in the design and construction of this facility. What I particularly appreciate is UP's decision not to wait until the new facilities were ready to increase the intake of medical students, but to do so as soon as the funding was secured by increasing the intake to 300 as early as 2013. This shows the University's support for the goal of universal access to health care for all South Africans.'

The increase in student intake offers opportunities to African students who would otherwise not have had the opportunity to become doctors.

UP was granted funding to upgrade the medical school campus by the National Skills Development Fund and the National Department for Higher Education and Training. Construction started in June 2013 and cost R173 million. The complex is made up of two buildings, the first of which is the Administration Building, consisting of 62 offices, housing student administration, as well as the Anatomy, Physiology and Pharmacology departments. The building further boasts a student clinic, two cafeterias, a rehabilitation gymnasium, boardrooms and an 85-bay basement parking garage. The second building is the Lecture Hall Building which houses four 400-seat lecture halls, student ablution facilities and a large, open study area.

Several green design components were incorporated in the design of the building, from the orientation of the offices to harness the natural sunlight, to the harvesting of rain water to be utilised for flushing of toilets and irrigating the indigenous gardens that surround the complex. The positioning of the two buildings creates a large public space that links the Administration Building and Lecture Hall Building with the adjacent Basic Medical Sciences Building and can be used for socialising.

Prof Tiaan de Jager, acting Dean of the Faculty of Health Sciences, says the world-class lecture halls and additional facilities provide not only intellectual spaces, but also the opportunity to be creative in a stimulating environment. 'As reflected by the name of the building – Tšwelopele, meaning progress – the focus is on the development of the institution, the Faculty of Health Sciences and its students.' 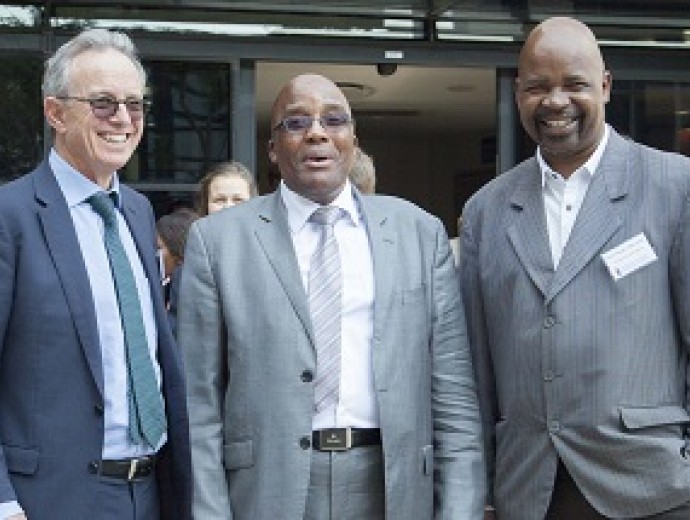 Prof Eric Buch, former Dean of the Faculty of Health Sciences with the Honourable Minister of Health, Dr Aaron Motsoaledi and Prof Tinyiko Maluleke, Advisor to the Vice Chancellor and Principal